FTSE trying to break key resistance as elections near

The index has been trying to carve out a bottom and today it was peeking above old highs in the 7420-7433 range.

As my colleague Fiona Cincotta reported earlier, European markets extended their gains this morning amid the lack of any fresh news with investors continuing to fade the dips due to ongoing optimism over a US-China Phase One trade deal. In the UK, traders are also watching polling data closely ahead of the December 12 general election. So far, we haven’t seen any major swings in the polls to impact the pound or the FTSE in a meaningful way, with the business-friendly Tories still remaining the firm favourites to win the majority.

If the polls are correct and the Conservatives do end up winning the majority of the votes, then the UK will almost certainly leave the EU on January 31 after two extensions and three and a half years since the referendum which divided the nation. The UK will then enter a transition period and trade negotiations will commence. At last, there will be some certainty in so far as Brexit is concerned.

Meanwhile, in the event of an election shock, it will most likely be the pound rather than the internationally-focused FTSE that may show a negative reaction. In fact, a drop in the pound may even support the index as we have seen so many times in the past.

So, the outlook on the FTSE appears somewhat positive in the short-term. However, with the US stock markets rallying to severally overbought levels, there is a growing risk we may see a sharp sell-off in one of these days on Wall Street. If that happens, then global equities may fall as well, which could put downward pressure on the FTSE as well. So, we are just cautiously bullish on the FTSE at this stage. 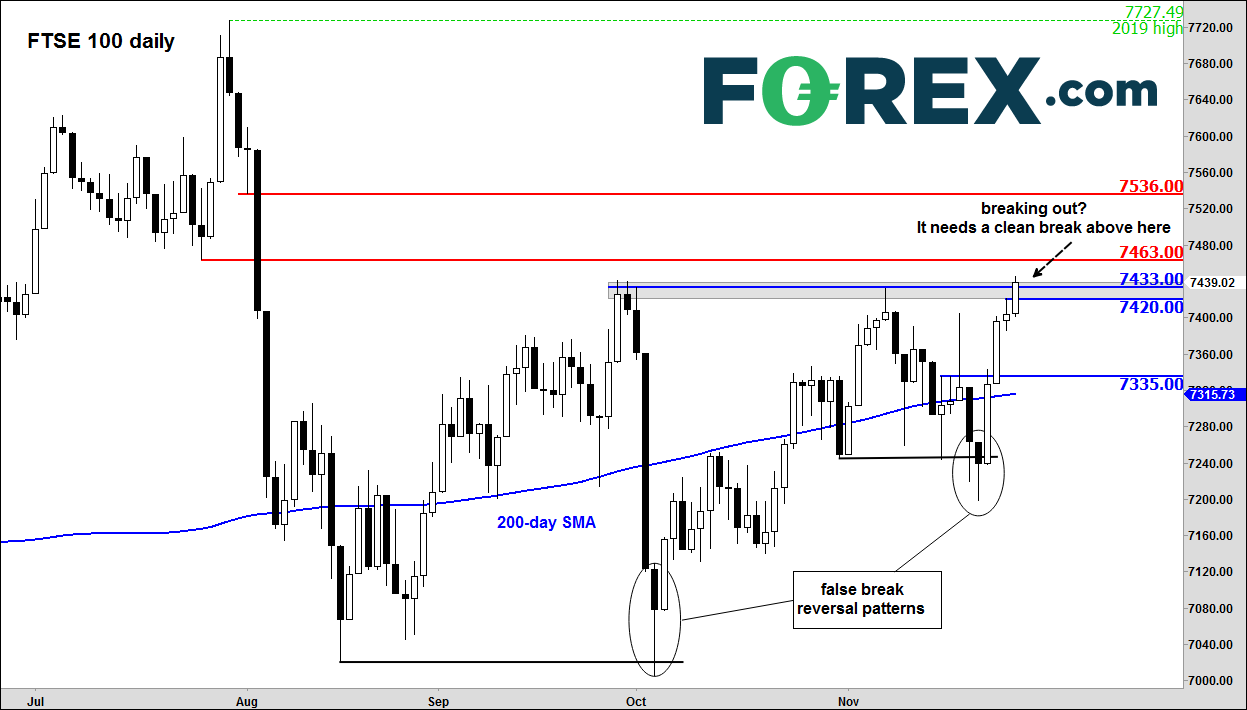 Technically, the price action on the FTSE has been more range-bound that its European peers, and nothing like the US indices, possibly reflecting the uncertain political situation domestically. However, it has been trying to carve out a bottom and today it was peeking above old highs in the 7420-7433 range. Thus it may be on the verge of a breakout from the range it has been stuck inside since early August. A clean break above this 7420-7433 range is what the bulls are looking for now. If seen, future dips back into this region could be defended, potentially leading to further gains. A potentially stronger support level comes in just ahead of the 200-day average (7315) around 7335. Meanwhile, a couple of potential resistance levels or bullish objectives to watch out for include 7463 and 7536, levels which were formerly resistance.