Despite the uncertainty, the FTSE 100 is still up a good 9% year-to-date, thanks to a weak pound and outlook for global interest rates to remain low for longer.

So, another round of indicative parliamentary votes on alternatives to Theresa May’s Brexit deal came to pass last night and once again all the options were rejected. A motion for a customs union with the EU was rejected by just three votes. The stalemate has clearly frustrated people on both sides. Tory MP Nick Boles resigned the whip in frustration, while EU’s chief Brexit negotiator, Michel Barnier, blasted UK MPs by suggesting that there are “only majorities against things” in the Commons… and “that's not how we're going to manage an orderly withdrawal of the UK." He added that a no-deal exit is now more likely but it can still be avoided. A general election may be needed if the stalemate continues in order to avoid a hard Brexit. That would probably mean a much longer extension to Brexit, which could further increase uncertainty and hurt consumer and business sentiment.

However, despite the uncertainty, the FTSE 100 is still up a good 9% year-to-date, thanks to a weak pound and outlook for global interest rates to remain low for longer. The FTSE is showing a similar performance to the mainland European indices, so Brexit uncertainty is not just holding back UK stocks, but Europe as a whole. Indeed, because of Brexit and anaemic growth, European markets are underperforming their US peers. Nonetheless, the path of least resistance continues to be to the upside for the FTSE 100 and other EU indices and will remain that way until they create bearish reversal patterns or break a prior low. The FTSE’s technical outlook would turn bearish should it break its most recent low at around 7150, for then it will also have broken below its bullish trend line. 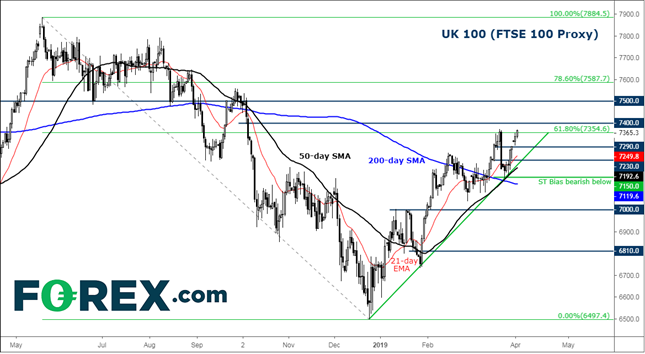 Source: TradingView and FOREX.com. Please note, this product is not available to our US customers.