FX analysis and technical outlook: All Eyes on the EU Referendum

<p>The tragic killing Thursday of a pro-EU politician, UK Labour Party MP Jo Cox, occurred just a week before Britain is scheduled to hold its EU referendum to vote on whether or not it will remain in the European Union. This horrific event has naturally sent shockwaves across the UK and around the world, leading to a temporary halt in the previously aggressive campaigning from both sides of the Brexit debate.</p>

All Eyes on the EU Referendum

The tragic killing Thursday of a pro-EU politician, UK Labour Party MP Jo Cox, occurred just a week before Britain is scheduled to hold its EU referendum to vote on whether or not it will remain in the European Union. This horrific event has naturally sent shockwaves across the UK and around the world, leading to a temporary halt in the previously aggressive campaigning from both sides of the Brexit debate.

From a financial market standpoint, the tragedy has boosted speculation that more support could now be shifting towards the Remain camp, after the past couple of weeks of polling generally showed the Leave camp assuming the lead. Despite this tentatively shifting speculation, however, it is clear that volatility in the polling as well as in the markets will continue to be exceptionally high in the run-up to the referendum. It is also clear that the actual outcome of the vote could very well go either way – Remain or Leave.

This volatility is being displayed distinctly in the most potentially-affected markets, including currencies. The British pound and euro, in particular, have been pressured heavily since the beginning of June, as UK polls began to show that those who leaned toward a UK departure from the EU were gaining momentum over those who wished to remain. These polling results represented a sharp reversal from previous months, when the Remain camp had consistently commanded a relatively comfortable lead.

At the same time that the Leave camp was closing the gap and gaining ground during the first half of this month, the exceptional market risk presented by a possible Brexit outcome boosted safe haven assets and currencies like gold, the Japanese yen, and the Swiss franc. In the case of the yen, the Bank of Japan decided to refrain from implementing additional monetary easing measures on Thursday. This led to a further sharp surge for JPY as the central bank made it clear that it was not going to stand in the way of yen strength for the immediate time being. With that said, however, if a Brexit outcome actually prevails and the safe haven yen surges much more in response, Japan could very well be in the position to intervene in attempts to drive down its currency. The same potentially holds true for the Swiss National Bank, which also left its monetary policy stance unchanged on Thursday, as it could act to halt any excessive appreciation of its safe haven franc.

While the noted tragedy surrounding Jo Cox may have contributed to increased support for the Remain camp and a tentative lifting of pressure off both the pound and euro for the time being, the risk of a Brexit outcome still remains real and substantial. This risk could be reflected next week ahead of the referendum outcome in resumed pressure on sterling and the euro, along with continued support for safe haven currencies like the yen and franc.

GBP/USD broke down a week ago below a key uptrend line that extended back to February’s multi-year low of 1.3835. This past week, as the risk of a Brexit outcome continued to weigh on the pound in the run-up to the EU referendum, the currency pair followed-through on that drop to closely approach a key downside target at the 1.4000 psychological support level. Price rebounded off that support on Thursday as speculation that the Remain camp would gain more support after the tragic killing of pro-EU politician, Jo Cox. Despite this bounce, with the EU referendum less than one week away, risk of a potential Brexit should continue to place pressure on GBP/USD, possibly extending the currency pair’s heavily-entrenched bearish trend. Currently, the downside target continues to be at the noted 1.4000 level. On any subsequent breakdown below 1.4000, further losses could open the way towards the 1.3800 level, last approached at the noted February low. Of course, in the event of an actual Brexit outcome, the downside for GBP/USD could be substantially worse. In contrast, a vote to remain will take the event risk off the table and likely lead to a considerable relief rally and alleviation of pressure on both sterling itself as well as the GBP/USD currency pair. The run-up to the referendum within the next week could likely see additional pressure on the euro and strength for the safe haven yen, which could open the way to significantly further losses for EUR/JPY. Thursday’s BoJ-driven plunge for the currency pair prompted a clean breakdown below the key 119.00 support level, which had previously been a major downside target since early June. The breakdown followed through to hit its next downside target at 116.00 support, establishing yet a new three-year low, before rebounding and paring some of those losses. As of Friday, EUR/JPY continued to show weakness, falling once again towards the noted 116.00 level. With any re-break and sustained trading below 116.00, the next major downside targets are at the 114.00 and 111.00 support levels. After the referendum, trading direction and levels will be dependent upon both the actual outcome of the vote as well as possible actions by Japan if a pro-Brexit result prevails and the yen strengthens substantially in response. The US dollar has been in a severely weakened state against the Japanese yen recently, due in part to the sharp decline in expectations for a near-term Fed rate hike and a dovish FOMC statement this past week. At the same time, the Japanese yen has continued to strengthen largely due to safe-haven buying ahead of next week’s Brexit risk event as well as the Bank of Japan’s inaction at its monetary policy meeting this past week. As a result, USD/JPY broke down below a major support level at 105.50 this past week and established a new long-term low at 103.54, a level that has not been seen since August of 2014. In the event of further yen-strength ahead of next week’s Brexit risk event, further downside follow-through below the noted 105.50 level could open the way for more USD/JPY losses towards the next major downside targets at the 103.00 and then 101.00 support levels. 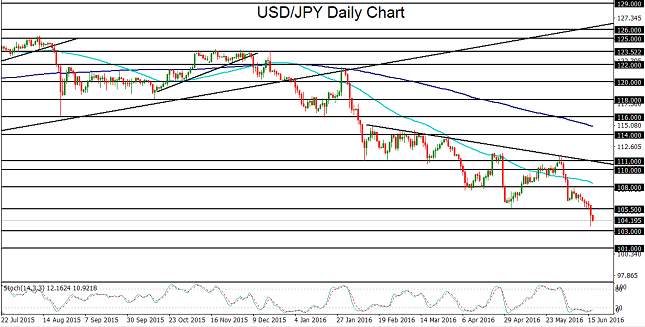