<p>Some of the key macro themes this past week were focused on the US dollar, global equities, and the ongoing saga surrounding crude oil. Specifically, the dollar remained well-supported, despite weaker-than-expected inflation readings during the week that should reasonably prompt the Federal Reserve to continue its cautious and increasingly dovish stance. Stock indices, most notably in the US and UK, hit year-to-date highs this week, largely due to rebounding crude oil prices and progressively more dovish central banks. Finally, as for crude oil itself, the past week has essentially been a preview for this coming weekend’s highly anticipated showing of major oil-producing nations in Qatar, co-starring Saudi Arabia and Russia.</p>

Some of the key macro themes this past week were focused on the US dollar, global equities, and the ongoing saga surrounding crude oil. Specifically, the dollar remained well-supported, despite weaker-than-expected inflation readings during the week that should reasonably prompt the Federal Reserve to continue its cautious and increasingly dovish stance. Stock indices, most notably in the US and UK, hit year-to-date highs this week, largely due to rebounding crude oil prices and progressively more dovish central banks. Finally, as for crude oil itself, the past week has essentially been a preview for this coming weekend’s highly anticipated showing of major oil-producing nations in Qatar, co-starring Saudi Arabia and Russia.

As for the dollar, key inflation data released by the US government this week included both the Consumer Price Index and the Producer Price Index for March. Both of these major inflation measures fell short of expectations, highlighting persistently weak inflation in the US. With the Federal Reserve already becoming increasingly cautious with regard to the pace of interest rate hikes going forward due to economic growth concerns, this inflation data can only reinforce the Fed’s currently dovish stance. Despite these apparent negatives for the dollar, the greenback managed to rebound considerably this past week, especially in the middle of the week, prompting a sharp pullback for the previously rallying EUR/USD currency pair.

As the dollar rallied, so did major stock indices in the US and UK, which hit highs not seen since late 2015. In the case of the S&P 500, the US stock benchmark resumed the sharp rally that has been in place since the latest rebound began in mid-February. Much of this rally has been driven by recovering oil prices, but also by the prevailing global environment of central bank dovishness. From the Bank of Japan to the European Central Bank to the Bank of England to the US Federal Reserve, a decidedly dovish demeanor dominates the central banking landscape, which has generally helped to improve sentiment in the equity markets.

As for crude oil, there is not much to say that has not already been said with regard to Sunday’s meeting of major oil producers in Doha, Qatar. Representatives from OPEC nations, most notably Saudi Arabia, will meet along with Russian counterparts to discuss a potential deal to cap crude oil production at recent near-record output levels. The goal of such a deal would be to help ease the massive global oversupply problem that has plagued oil prices since late-2014. Much back-and-forth speculation has occurred in the months running up to this meeting, with often-conflicting reports on the shifting stances of various participants. As it currently stands, prevailing expectations are that Saudi Arabia and Russia will probably agree, perhaps loosely, to an output cap, even without Iran’s participation. If this turns out to be accurate, such a deal may likely lead to a further boost for crude oil prices, at least in the very short-term. Clearly, a failure to reach such a deal would most likely lead to a significant drop in prices that could be sustained for quite some time, given all of the continuing supply pressures that have weighed on crude oil for so long. Even if a deal is successfully reached, however, the question remains as to whether a coordinated production cap at the recent near-record output levels would do much to alleviate the oversupply situation, especially without Iran’s participation. Therefore, even if a deal is reached and it results in a short-term boost for oil, the longer-term picture still remains murky to significantly bearish. This is especially the case in light of recent reports out of the US that have detailed a much higher-than-expected build in crude oil inventories. Given the ongoing oversupply issue that continues to pressure prices, the potential effectiveness of a coordinated output deal is highly questionable.

Aside from this weekend’s oil producer meeting, next week has in store several important economic events and data releases. On Tuesday, the Reserve Bank of Australia will release the minutes from its last monetary policy meeting. Also on Tuesday will be the German ZEW Economic Sentiment data release, along with several central bank governors’ speeches, including that of the Reserve Bank of Australia, Bank of England, and Bank of Canada. Wednesday brings the average earnings index, claimant count change and unemployment rate out of the UK. On Thursday, the UK will release retail sales data, while the European Central Bank will hold its usual press conference and rate decision where it will provide further indications of its monetary policy stance. Finally, Friday brings critical economic data in the form of retail sales and the Consumer Price Index inflation data from Canada.

EUR/USD pulled back sharply from key resistance around the 1.1450 level this past week. Prior to the retreat, the currency pair had been in a prolonged consolidation just under 1.1450 after having risen in a strong uptrend characterized by higher highs and higher lows since December’s lows near 1.0500. Much of EUR/USD’s rise in the past four months can be attributed to a falling US dollar that has been pressured by an increasingly dovish Federal Reserve and the resulting lowered expectations for a regular pace of interest rate hikes in the US due to persistent global economic worries. The currency pair has stayed well-supported because of this dollar pressure, despite what one might expect should be a weakening euro due to the European Central Bank’s own extended easing program. This week’s pullback from resistance was largely due to a strong dollar rebound, despite weak inflation data out of the US. The pullback brought EUR/USD back down to a key uptrend line before a bounce at the end of the week. To the upside, the noted 1.1450 resistance area continues to be the primary level to watch. In the case of any resumed dollar weakness in the near-term, a sustained breakout above this resistance could go on to target the next major upside objective at the 1.1700 level, which was the area of the high reached in August 2015. To the downside, key support continues to reside at the 1.1100 level. 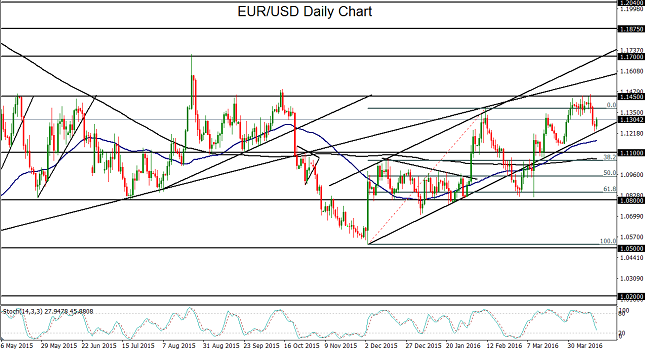 USD/JPY spent the earlier part of the past week in a rebound from major support at 108.00. Towards the end of the week, however, the currency pair pared its gains, shifting momentum once again to the downside. Prior to the bounce from 108.00, USD/JPY has been in an extended plunge for more than two weeks. That plunge prompted a breakdown below successively lower major levels, including key 111.00 support followed by the 110.00 psychological level, finally to hit its major downside support target at 108.00. In the process, the currency pair established a new 17-month low. Although the surging yen has raised speculation that the Bank of Japan may soon intervene to weaken its currency, skepticism remains over the efficacy of the central bank’s attempts to do so, especially in light of its recent easing into negative interest rate territory, which had no lasting impact on restraining yen appreciation. In the event of further yen strength and a resumption of dollar weakness, and in the absence of a successful attempt by the Bank of Japan to intervene, a sustained breakdown below the 108.00 level could target the next major downside objective at the 105.00 support level. 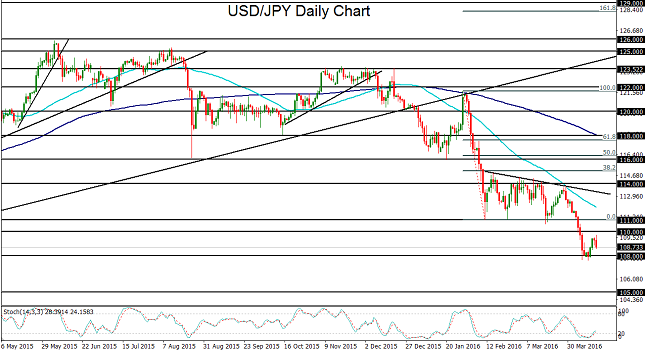 USD/CHF spent the past week largely in a sharp rebound from key support at 0.9500, as the dollar rallied. This rebound brought the currency pair back up to major resistance around the 0.9650 prior support level, tentatively rising above that level towards the end of the week. From a slightly longer-term technical perspective, USD/CHF has been in a general decline since December, printing consistently lower highs and lower lows. Most recently, the currency pair broke down below the noted 0.9650 prior support level, as well as a major uptrend line extending back to May of last year. This week’s dollar surge has occurred despite weakness in US economic and inflation data. In the event that resistance is able to hold off further advances, a turn back to the downside should once again target the 0.9500 support objective, followed by a potential continuation of the recent downtrend. On any unexpectedly strong and sustained breakout above resistance, further resistance can be seen around 0.9785, the level of late March’s swing high. 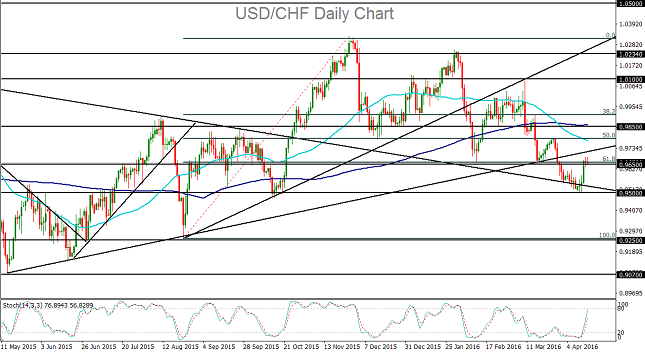