<p>With less than six weeks left to go before the UK holds its June 23 referendum to vote on whether or not it remains in the European Union, concerns have begun to escalate over the potentially dire economic consequences that may result in the event of an actual “Brexit.”</p>

As Brexit Vote Draws Closer, GBP/USD Could Get Pounded

With less than six weeks left to go before the UK holds its June 23 referendum to vote on whether or not it remains in the European Union, concerns have begun to escalate over the potentially dire economic consequences that may result in the event of an actual "Brexit."

These concerns were further compounded this past week when the Bank of England (BoE) issued its monetary policy and inflation reports on Thursday. Although the central bank kept interest rates unchanged at a record low 0.5%, as widely expected, the most compelling aspect of its statements was a grave and forceful warning that a UK exit of the EU would cause substantial harm to the economy and currency. Though many such warnings have surfaced in the months leading up to the June referendum, the BoE’s admonition was particularly compelling.

It has been widely speculated that any decision by the UK to exit the EU could have a dramatically negative effect on both the British pound and the euro. Still, however, even after Thursday’s stern Brexit warning from the BoE, the pound appeared to brush it off at first, rising in the immediate aftermath of the policy statements. This rise was largely due to a higher 2-year inflation forecast as well as the fact that there were no committee votes for an interest rate cut, which some central bank watchers had been anticipating.

Although the pound has clearly been trading progressively lower within the past two weeks after it rose to approach 1.4800 in early May, the real risk of a UK exit may not yet have been fully priced-in to the currency. This could mean that sterling may have significantly more to fall in the run-up to the June referendum, not even to mention what could happen to the pound if a "leave" outcome actually prevails.

To exacerbate the pressure on the GBP/USD currency pair, the US dollar has generally remained relatively strong and supported this past week, even in the midst of recent US economic data, most notably centered on employment, that has largely been weaker than expected. This includes significantly higher-than-expected unemployment claims on Thursday and a major disappointment in non-farm payrolls data the previous week. Despite this string of weak data, however, one fact remains clear. In a global environment where major central banks are overwhelmingly dovish and trending towards further monetary easing, the Federal Reserve stands as the only major central bank that, while also dovish in recent months, is even considering near-term interest rate hikes. In this case, the least dovish of the doves can ultimately be seen as comparatively hawkish.

This still-prevailing monetary policy divergence between the Fed and other major central banks could continue to keep the US dollar supported and even potentially lead to additional dollar-strength as speculation over the next Fed rate hike continues to intensify. Meanwhile, all eyes are on the UK’s June referendum, and the risks of a Brexit in the run-up to the vote could continue to place additional pressure on the pound. Combined, these two conditions could potentially lead towards further substantial weakness for GBP/USD.

Next week, several important economic data releases could also have a significant impact on the currency pair. On Tuesday, both the UK and US will release Consumer Price Index inflation data. Wednesday brings key employment/unemployment data from the UK followed by minutes from last month’s FOMC meeting out of the US. Finally, on Thursday, UK retail sales in the morning will be followed later in the US by weekly jobless claims and the Philly Fed Manufacturing Index.

The past two weeks have seen GBP/USD fall from its early May high around its 200-day moving average down to hit its 50-day moving average by Friday. The drop on Friday was pronounced, as the US dollar surged strongly while the pound remained pressured. In early May, GBP/USD hit a four-month high approaching 1.4800-area resistance near the noted 200-day moving average, but then began its current downturn. That turn back to the downside was also from the resistance imposed by a key downtrend line extending back to the highs of last August. As of Friday, the currency pair had dropped to touch its 50-day moving average, hitting a critical support level. If GBP/USD continues to trade under 1.4500 resistance, continued pressure on the pound and support for the dollar could lead to a resumption of the long-term downtrend. With any breakdown below the noted 50-day moving average, the next major downside targets potentially reside around the 1.4250 support/resistance area followed by the key 1.4000 psychological support level. Any further breakdown below 1.4000 could pressure GBP/USD down towards February’s multi-year low of 1.3835. 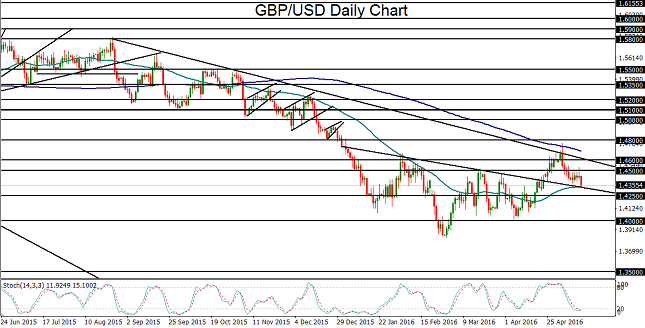 The past week has seen USD/JPY generally rising but in a choppy manner, as the yen has suffered due to ominous warnings from Japan concerning the country’s preparedness to intervene in its objective to weaken its currency. Aside from reiterating the fact that Japan would step in if the yen appreciated further to the point of harming the Japanese economy, officials also provided a target USD/JPY range for possible intervention – between 90.00 and 95.00. As a result of these warnings, the yen has generally been selling off, which has helped to lift USD/JPY further off its new long-term low of 105.54 that was just hit in early May. As of Friday, the currency pair had initially climbed up to a high well above 109.00 as the yen remained pressured and the dollar was stable and supported. The current rise from the noted early May lows has lifted USD/JPY closer to major resistance at the 110.00 psychological level, which is also around where its 50-day moving average is currently situated. In the event of a turn back down from around this key resistance, the currency pair could move towards a continuation of the strong downtrend that has been in place since late last year. The key bearish target on any such downside extension continues to be at the 105.00 support objective. 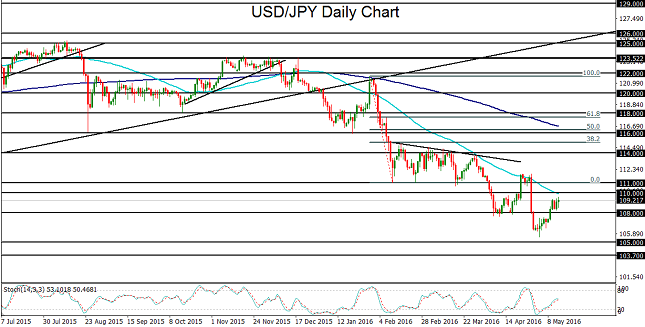 For the past week, AUD/USD has seen further deterioration as it broke down below major prior support around the 0.7350 level. By Friday, the currency pair had reached all the way down to touch its 200-day moving average, continuing the sharp bearish trend that has been in place for the past three weeks from April’s 0.7833 high. This three-week drop has been fueled by a combination of weak inflation data, lowered inflation forecasts, and most notably, a Reserve Bank of Australia rate cut of 25 basis points to a new record low of 1.75%. During the course of its sharp decline, AUD/USD has also broken down below both its 50-day moving average and an uptrend channel extending back to January’s multi-year lows near 0.6800. After falling below 0.7350 this past week, the currency pair settled on Friday below 0.7300. In the event of further follow-through under 0.7300 with a breakdown below the noted 200-day moving average, the next major bearish target immediately to the downside is at the key 0.7200 support level followed by the 0.7000 psychological level. 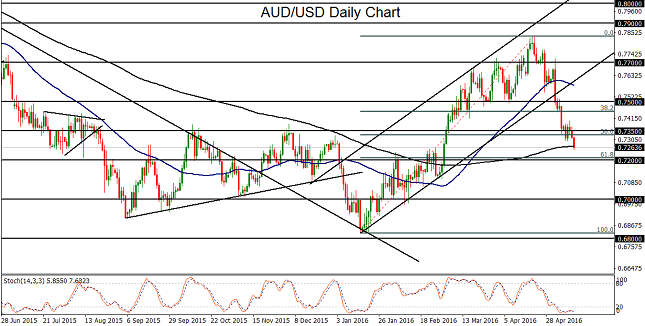