<p>Needless to say, markets in the past week have been rocked to and fro by the prior week’s Brexit decision. In the aftermath of Britain’s historic vote to leave the European Union and the resulting political turmoil, global financial markets have reacted in extreme and varied ways.</p>

Needless to say, markets in the past week have been rocked to and fro by the prior week’s Brexit decision. In the aftermath of Britain’s historic vote to leave the European Union and the resulting political turmoil, global financial markets have reacted in extreme and varied ways.

Immediately after last Friday’s stunning revelation of the UK’s vote in favor of a Brexit, markets responded generally in-line with prior projections. Sterling was expectedly hit the worst, with the GBP/USD exchange rate plunging to a new 31-year low and GBP/JPY experiencing a one-day slide of around 13%. Though the euro was somewhat less affected, it did not escape the carnage. The common currency fell precipitously against its major rivals, with the conspicuous exception of sterling. Meanwhile, safe haven assets like gold, the Japanese yen and to a certain extent, the US dollar, surged broadly as expected on the resulting market turbulence. Stock markets, most notably in the UK, Europe, and the US, experienced immediate and substantial drops on fevered speculation over Brexit’s implications for equities.

By Tuesday of the past week, however, the Brexit-driven market rollercoaster began to shift direction towards a full "risk-on" environment as worries about the UK’s Leave decision started to fade. Heavy pressure was lifted off both sterling and the euro, and safe havens pulled back in response. The most notable change, however, was the dramatic rebound and surge in the equity markets as the Bank of England gave indications of impending stimulus measures and the probability of a near-term Fed rate hike plummeted. The UK’s FTSE 100 index embarked on a meteoric rise, and US stock indexes followed suit. As of Friday morning, these equity markets were on track to book four days of exceptionally strong gains, with the S&P 500 topping 2100 and on pace towards its best week since 2014. Similarly, the FTSE closed its best week since 2011.

While this past week was rightfully dominated by Brexit implications and repercussions, markets in the coming weeks should gradually begin to shift back towards more routine, and less potentially earth-shattering, matters. From the US, a key event after the 4th of July holiday next week will be Wednesday’s release of minutes from June’s FOMC meeting. This should provide a clearer picture of the Fed’s perspective, as the FOMC minutes often contain nuances and revelations that have market-moving potential. Then, of course, will be June’s Non-Farm Payrolls and Unemployment Rate reports scheduled for Friday. After the dismal US employment numbers last month that helped preclude a Fed rate hike, next Friday’s data will be closely watched, along with potential Brexit consequences, for its possible effects on the Fed’s monetary policy stance going forward.

Other major global events next week include the interest rate decision and statement from the Reserve Bank of Australia on Tuesday, followed by key Canadian employment data to be released on Friday concurrently with the US Non-Farm Payrolls.

Bank of England (BoE) Governor Mark Carney made a speech on Thursday indicating that the central bank is likely to cut interest rates from the current record low of 0.5% within the coming months in reaction to last week’s Brexit outcome. Carney’s dovish speech helped lead to an immediate further surge for both UK and US stocks, while the British pound came under renewed and increased pressure. Immediately prior to the speech, GBP/USD had been in a modest rebound after having plummeted sharply late last week and early this past week in reaction to the UK’s Leave outcome. Carney’s speech on Thursday, however, quickly put a halt to the rebound, potentially foreshadowing further pressure on the pound to come. As a result, GBP/USD has fallen back down to approach its post-Brexit low around 1.3118. As that low-point represented the currency pair’s lowest level in more than 31 years, there is not much in the way of recent precedent on which to base further downside targets or projections. What can be better projected fundamentally, however, is that the gradually-evolving consequences of last week’s Brexit decision are likely to continue placing pressure on sterling, at least in the short-to-medium term. To the downside, a key psychological support target can be found at 1.3000. Any further breakdown below 1.3000 could likely open the way for significantly further losses into the mid-to-high 1.2000’s as the negative financial aspects of the Brexit impact become more clearly defined. 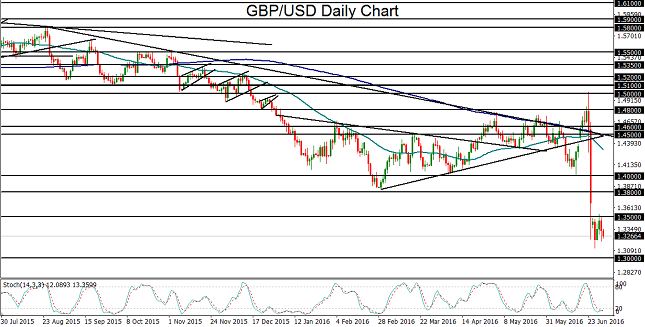 The euro found some relief this past week, rebounding moderately after its recent sharp decline, as the markets took a breather from Brexit concerns. Meanwhile, the safe haven Japanese yen, which had been in exceptionally high demand immediately after the outcome of the UK’s EU referendum, has subsequently made a retreat. Despite this turn of events in the aftermath of the Brexit decision, fundamental pressure on the euro remains strong, particularly in light of the turmoil in European markets that could likely result from Brexit. This may compel the European Central Bank to implement further stimulus measures that could weigh heavily on the euro. Additionally, a potential loss of confidence in the viability of the European Union due to the UK’s vote to exit, especially if other EU countries eventually begin to follow suit, should also put into question the viability of the euro common currency. If such a scenario begins to play out, it could also continue to impact the Japanese yen, which has recently been strongly boosted due to its traditional appeal as a safe haven currency during times of economic and financial volatility. Despite Japan’s wish to limit the strength of its currency, the yen has remained on a sharp incline due in part to its status as a safer alternative to riskier assets. For EUR/JPY, impending pressure on the euro coupled with support for the safe haven yen in the post-Brexit environment of uncertainty and volatility, is likely to result in additional downside momentum for the currency pair. As it currently stands, EUR/JPY continues to be entrenched within a long-term downtrend. The Brexit-driven plunge late last week prompted a sharp continuation of that downtrend, pushing the currency pair down to hit a new 3½-year low at 109.52 before the current relief bounce. Despite this bounce, EUR/JPY remains strongly bearish if it continues to trade under the 116.00 resistance (former support) area. On any resumption of the bearish trend after this relief rally, the next major downside targets are at the 111.00, 108.00, and then 105.00 support levels. Although the euro and pound both suffered massive hits as a result of last week’s Brexit decision, the euro has fared substantially better than sterling in the aftermath of the EU referendum. While both currencies were expected to plunge on a Brexit outcome, it was also projected that the British pound would endure a significantly more severe blow. This was indeed the case, as the EUR/GBP chart displays an exceptionally sharp surge from the pre-Brexit 0.7600 low, representing a swift and sudden appreciation of the euro against the pound after the UK voted to leave the EU. Post-Brexit, EUR/GBP continued its rise this past week to hit a new two-year high slightly above key 0.8400 resistance as of Friday. In the process of this quick climb, the currency pair broke out above a major previous resistance level around 0.8100, which represented the last major high back in April. Since the 0.7000-area lows in November, EUR/GBP has exhibited a strong bullish trend outlined by a key uptrend line and the 200-day moving average. In the past couple of months, this uptrend has been interrupted by pullbacks during periods of waning concern over the possibility of a Brexit. When the actual Brexit outcome surprised the markets last week, those diminished concerns instantly transformed into shock and uncertainty over the future of the UK and EU, placing tremendous pressure on the pound and immediately extending the uptrend for EUR/GBP. Although the euro has indeed sustained significant damage from Brexit consequences and could continue to do so, it is likely to persist in maintaining an edge over the more severely battered British pound, at least for the time being. As long as EUR/GBP remains above the noted 0.8100 level, now as support, the bullish bias remains intact. Any strong bullish breakout above the noted 0.8400 resistance level could see the currency pair rise to higher resistance targets at 0.8650 and 0.8800. 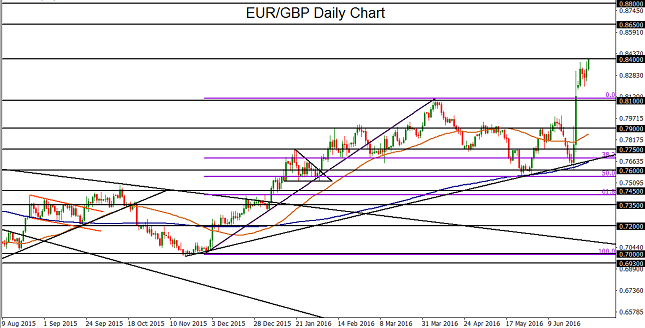