For many traders, the final two weeks of the year provide the perfect opportunity to step away from the screen, enjoy time with their families, and review the major trends that shaped the year.

When it comes to the FX market, there were a couple of crystal-clear trends over the course of 2020. For one, the US dollar fell against every one of its major rivals as the US struggled to contain the COVID-19 pandemic, ultimately resorting to aggressive fiscal and monetary stimulus to keep the economy running while vaccines were developed, approved, and (now) distributed. Likewise, the British pound fell against almost all of its major rivals this year amidst many of the same themes, and of course the ever-looming threat of a potential no-deal Brexit.

One big FX trend from this year that fewer traders may have noticed was the massive outperformance of the Swedish krona (SEK). As the chart below shows, Sweden’s currency gained ground against all its major rivals this year, tacking on upwards of 10% against laggards like the US dollar, Canadian dollar, Norwegian krone, and British pound:

When it comes to central bank policy, Sweden’s Riksbank held firm in 2020 compared to many other major central banks. After raising its benchmark interest rate to 0.00% in late 2019, the Riksbank held that rate steady throughout the year, making only incremental changes to its bank lending rate to try to stimulate the economy. Though the central bank did expand its balance sheet from roughly SEK 900B in January to SEK 1.3T as of writing, this expansion was smaller than the equivalent moves from other banks, making the krone relatively attractive from a monetary policy perspective.

Meanwhile, Sweden took a relatively unique approach to “managing” the COVID-19 pandemic. In essence, Swedish policymakers sought to continue economic activity mostly as “normal,” eschewing the draconian lockdown measures instituted by other Western European countries in an effort to avoid piling economic costs on top of the human toll. While some have debated the wisdom of this path, especially with a series of vaccines receiving approval in record time, it certainly helped Sweden’s labor market. The unemployment rate in Sweden dropped back to 7.7% as of November, roughly in-line with where it was when the pandemic began; by contrast, neighboring Norway has seen its unemployment rate jump from below 4% at the start of the year to 5.2% now. While the verdict remains out on Sweden’s unique strategy for addressing COVID-19, there’s some evidence that it helped the country avoid the worst of the labor market disruption seen in other developed economies.

With the trend still clearly pointing to the downside for USD/SEK, there’s a decent chance that the krone’s strength and US dollar’s weakness will extend into the first quarter of 2021. The pair hasn’t spent more than two days above its 100-day EMA since May, and as long as that dynamic remains intact, traders will eagerly sell USD/SEK on any short-term rallies. Longer-term, readers may start to look toward the lows from 2016, 2017, and 2018 in the 7.90 zone as a possible support level to test next: 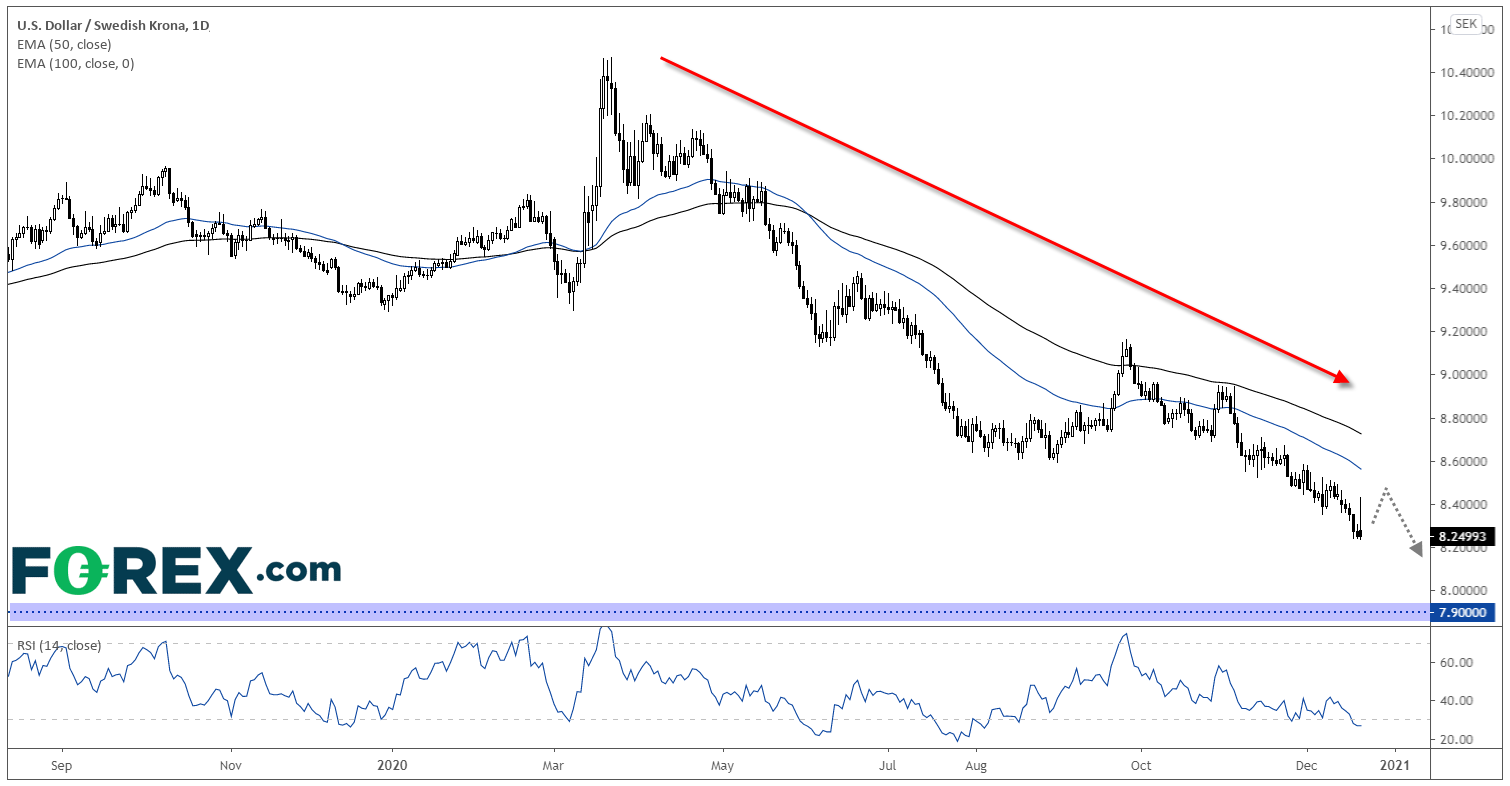