This political move was undertaken so that May could secure a solid mandate to deal with difficult negotiations with the European Union as she sees fit, amid the ongoing formal process of UK/EU separation. The pound rose sharply on that announcement due in large part to the fact that May’s Conservative Party remains far ahead of the Labour Party in polling. In turn, this further bolstered speculation that May’s leadership would lead to a more concessionary stance towards the EU, a potentially better deal for the UK, and a lower likelihood of a “hard Brexit.” This would then promote greater stability for both the UK and its currency.

As the pound has continued to rise in a relief rally, the safe-haven Japanese yen has fallen sharply for more than a week as a strong, risk-on environment has taken hold of the markets. This has especially been the case after this past weekend’s first round of the French presidential election, which showed the market-friendlier Emmanuel Macron gain increasing support over his far-right rival, Marine Le Pen.

Amid diminishing Brexit concern that has alleviated pressure on the pound, as well as decreased risk aversion in the markets that has reduced demand for the yen, GBP/JPY has correspondingly been boosted sharply to break out well above a key downtrend line extending back to December’s 148.00-area high. This surge has been sustained up to Thursday and could continue to drive GBP/JPY higher, barring any UK political surprises or major market-disrupting events on a global basis. The next key upside resistance level is around the 145.00 area. With any further breakout above 145.00, GBP/JPY could once again begin to target the critical 148.00 resistance objective. 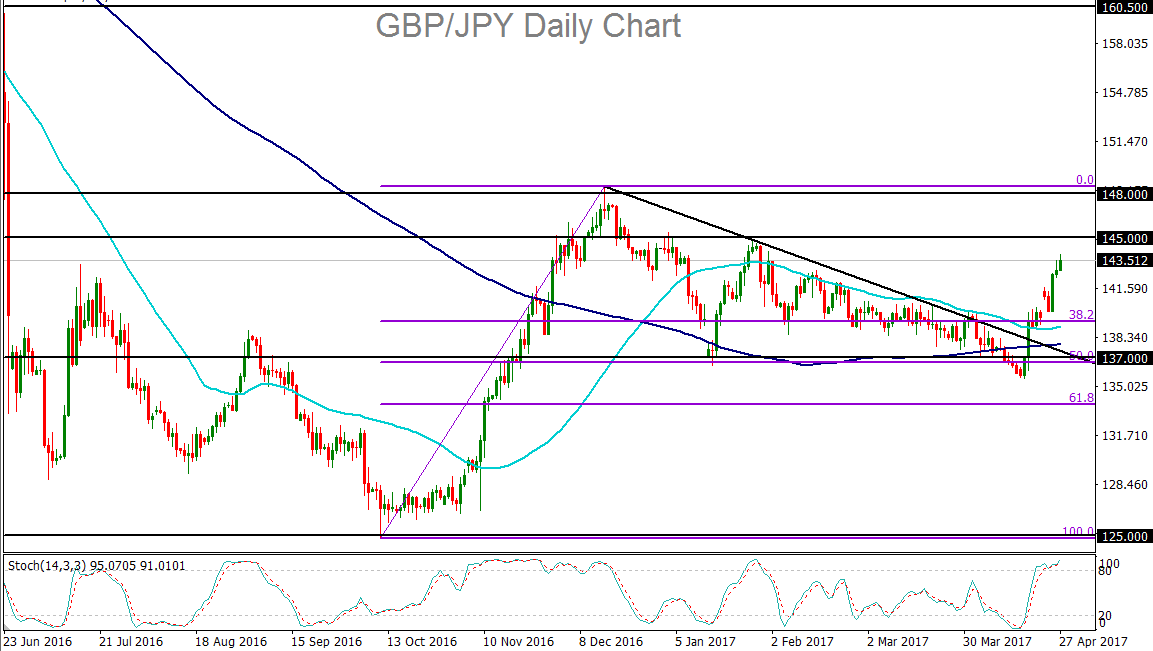