Tuesday was a day of two halves for the pound: the currency was trading lower at the start of the session only to turn around violently during the afternoon session. As a result, it closed the day higher against most currencies, leaving behind reversal-looking price patterns against some. But sterling has started today’s session again on the back foot. Will we see a similar second half performance as we did on Tuesday?

Tuesday was a day of two halves for the pound: the currency was trading lower at the start of the session only to turn around violently during the afternoon session. As a result, it closed the day higher against most currencies, leaving behind reversal-looking price patterns against some. But sterling has started today’s session again on the back foot. Will we see a similar second half performance as we did on Tuesday? Well, unlike Tuesday, when the Bank of England’s Kirstin Forbes delivered some surprisingly hawkish comments, there is not much fundamental stimulus to drive the pound. So, consolidation could be the name of the game. But despair not. The pound could still move sharply against some currencies, especially the Canadian and New Zealand dollars (see below). But the GBP/USD itself could also extend its gains, after all due to technical follow-up buying momentum.

US Oil inventories set for big rise: GBP/CAD in focus

The oil-linked Canadian dollar is in focus as crude responds to the latest weekly US oil inventories data from the US Department of Energy, which is likely to show a massive build if the estimate from industry group the American Petroleum Institute is anything to go by. Should oil and therefore the Canadian dollar fall further, then the GBP/CAD could surge higher. However it is worth pointing out that the market has now at least partially priced in a big build in crude stockpiles. So it is possible that oil prices may not fall further, though this does not necessarily mean the Canadian dollar will follow suit.

But for me it is the other commodity currency which is likely to garner most of the attention: the New Zealand dollar. That is because the Reserve Bank of New Zealand is going to make a decision on interest rates. It probably won’t be much of a decision to make anyway so the focus will be on the rate statement and the press conference. On Tuesday the NZD slumped on news that the RBNZ’s Governor Graeme Wheeler will step down when his term ends in September. Deputy Governor Grant Spencer will replace him for six months after his departure until a permanent successor is appointed in 2018. With the NZ general election coming up at the end of September, the next government will have plenty of time “to make a decision on the appointment of a permanent governor,” according to Finance Minister Steven Joyce.

What this probably means in terms of monetary policy is that neither Wheeler nor Spencer – as a caretaker – will probably make any changes to interest rates now, unless something dramatically happens in the economy in the months ahead. Thus, the monetary policy will most likely remain extreme accommodative – by New Zealand’s standards anyway. Indeed, although a record low, the current 1.75% official cash rate (OCR) in New Zealand is one of the highest among the developed economies.

Is GBP/NZD about to embark on a rally?

Thus the GBP/NZD may well head higher in the likely event that the RBNZ will keep rates unchanged and deliver a dovish policy statement. Technically, this volatile cross has been range-bound in recent times instead of trending. After Tuesday’s slump in NZD and the comeback in GBP, the GBP/NZD was left with a bullish engulfing candlestick pattern on its daily chart. This pattern typically points to a trend reversal, especially as in this case it happened around a key support zone circa 1.6875-1.6950. So far today, the GBP/NZD hasn’t enjoyed any bullish momentum. But this could change later on in the day, possibly around the 1.7045 support level. If the cross does turn positive as we expect it to then it may go on to move towards the bearish trend line around 1.7300 area, before it decides on its next move. 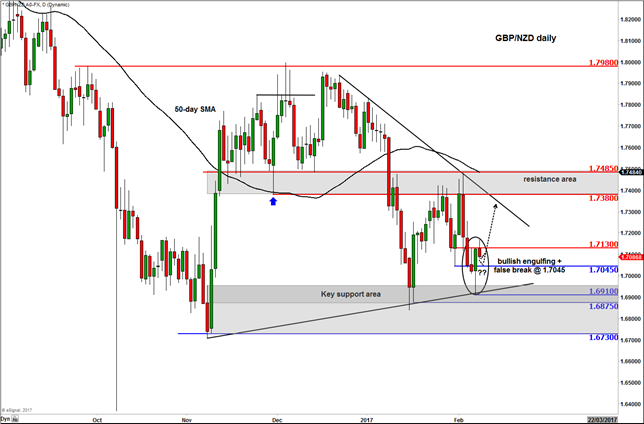