GBP/USD rises towards major highs ahead of key events

The dollar’s rebound on Thursday was driven in part by Wednesday’s release of relatively hawkish minutes from the last FOMC meeting in March, which indicated a nearly unanimous outlook by Fed members for higher US growth and interest rates going forward.

Sterling’s rise on Thursday, however, eclipsed the dollar rebound, extending the recent GBP/USD push towards January’s 1.4300-area post-Brexit-referendum highs. Thursday’s pound strength occurred as markets awaited scheduled remarks by Bank of England Governor Mark Carney later in the day. Looking further ahead to next week, some key UK-related economic data will be released, which will likely have a substantial further impact on the pound and GBP/USD. These releases will include UK wage growth and unemployment on Tuesday, consumer price index inflation readings on Wednesday, and retail sales on Thursday.

From the US next week, the release schedule is relatively light, but will feature US retail sales on Monday. Amid this light US calendar of events in the week ahead, geopolitical concerns should continue to take center stage for dollar traders.

From a technical perspective, as noted, GBP/USD on Thursday retested its late-March highs above 1.4240. In the process, the currency pair also extended its approach towards January’s 1.4344 high, a level not seen since the UK’s Brexit referendum in June of 2016 caused a massive sterling plummet. The overall trend throughout 2017 and into 2018 has been decidedly bullish. Most recently, a pullback in late March and early April saw GBP/USD hold and rebound above its key 50-day moving average. Since then, the sharp surge for the currency pair in April thus far has been helped along by a well-supported pound and a struggling US dollar. Amid next week’s UK economic releases and ongoing geopolitical uncertainty, GBP/USD could be poised for a possible breakout move. Though the March rise failed to break the post-Brexit high, there is a potential for such a breakout on the current surge if upcoming UK data and persistent dollar weakness support it. With any clear and sustained breakout above the 1.4300 resistance area, the next major upside objective on an extension of the current uptrend is around the 1.4500 psychological target level. 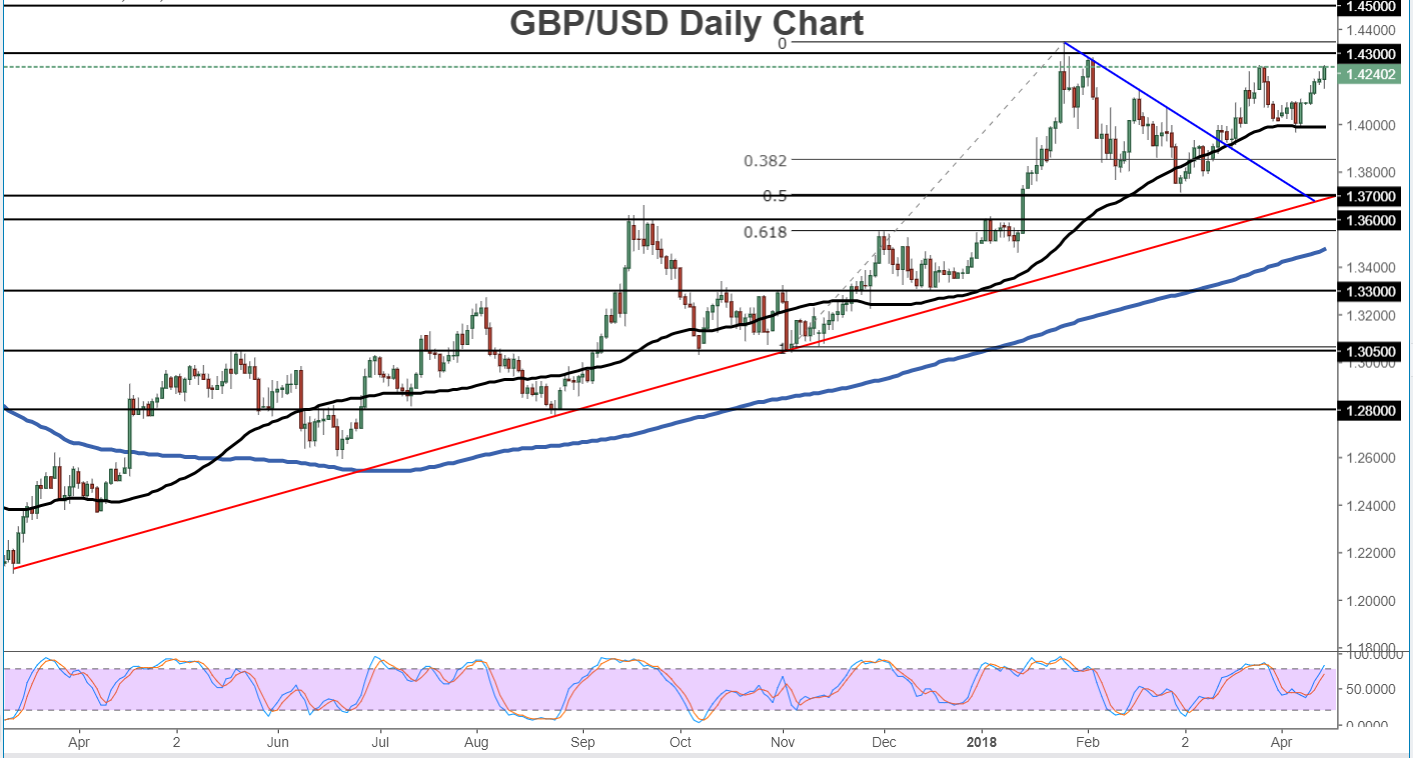