Share:
Sterling dropped sharply on Tuesday after Bank of England Governor Mark Carney suggested in a speech that a BoE rate hike would probably not be coming anytime soon. These comments contradicted last week’s hints by the central bank that rising inflation pressures in the UK might prompt some near-future policy tightening. In his speech, Carney cited concerns about the future impact of Brexit on the UK economy. The BoE Governor gave indications that there was no rush to raise rates, just as formal Brexit negotiations have officially begun this week with UK Prime Minister Theresa May in a much-weakened negotiating position.

Carney’s comments brushing off speculation over a BoE rate hike on the horizon dealt the British pound a rather significant blow. The currency dropped sharply on Tuesday against the US dollar, euro, and Japanese yen. Against the dollar, the pound hit a new two-month low after Carney’s speech, extending the recent breakdown that was initiated less than two weeks ago, when Theresa May made an unexpectedly poor showing in the UK general election.

Carney’s rejection of the rate hike speculation sharpened the contrast between the still-divergent monetary policies of the UK and US. As Carney sounded a very dovish tone on Tuesday, the US dollar continued to be buoyed by the sustained hawkishness of the US Federal Reserve and recent Fed speakers despite signs of declining US inflation. For the past two weeks, the dollar has been in a significant relief rebound at the same time that the pound has been weighed down by election and Brexit concerns.

The resulting GBP/USD slide first broke down (immediately after the UK election outcome) below a key uptrend support line extending back to the mid-March low. After that initial breakdown, the currency pair rebounded but remained pressured under the major 1.2800 resistance level. On Tuesday after Carney’s speech, GBP/USD hit a low right around the key 1.2600 support handle, an original downside target. With any further breakdown below 1.2600, the next major downside target is around the 1.2350 support level. 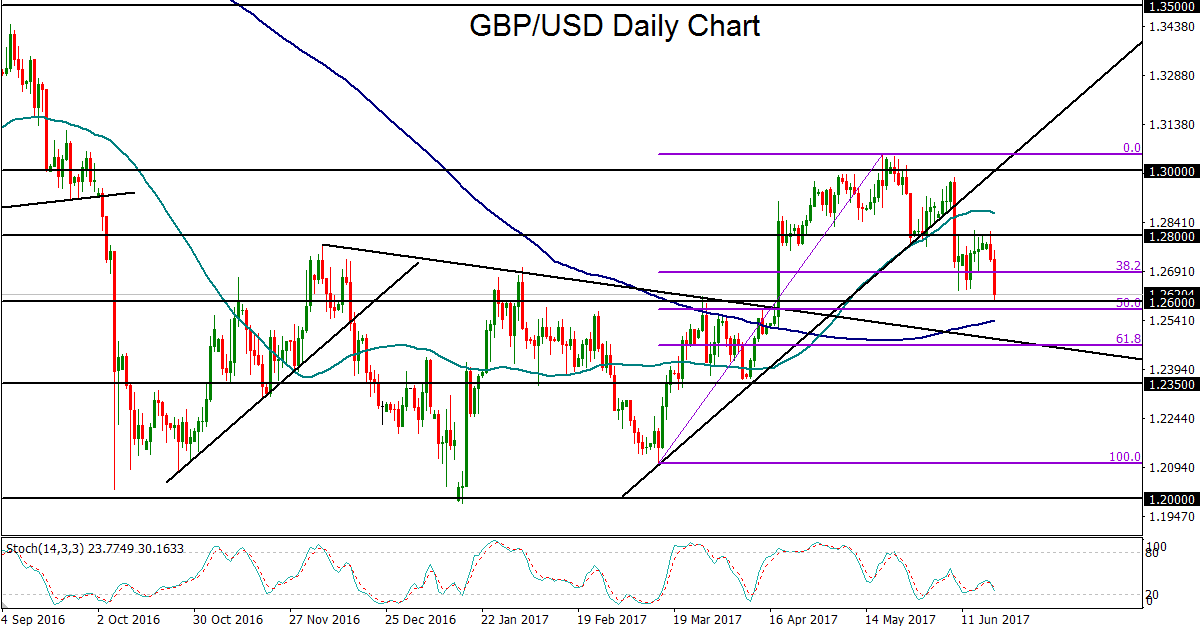