GBP/USD stalls at major resistance ahead of central bank meetings

<p>As concerns over a potential UK exit of the European Union, or Brexit, have subsided for the time being, the focus of global market attention has shifted to several crucial meetings and statements from major central banks both this week and next week. While the Bank of Canada, Reserve Bank of New Zealand, and European Central Bank all have major monetary policy events this week, next week has in store heavily-anticipated statements from both the US Federal Reserve and Bank of England (BoE). The Fed and BoE statements will occur next Wednesday and Thursday, respectively.</p>

As concerns over a potential UK exit of the European Union, or Brexit, have subsided for the time being, the focus of global market attention has shifted to several crucial meetings and statements from major central banks both this week and next week. While the Bank of Canada, Reserve Bank of New Zealand, and European Central Bank all have major monetary policy events this week, next week has in store heavily-anticipated statements from both the US Federal Reserve and Bank of England (BoE). The Fed and BoE statements will occur next Wednesday and Thursday, respectively.

These two central bank releases will also be the most applicable to GBP/USD traders, who have struggled recently to determine direction for the currency pair. Going into next week, the BoE has generally been seen as the more dovish of the two banks in its prolonged delay of implementing an interest rate hike due to ongoing concerns over weak inflation and lagging economic growth. At the same time, the Fed has vacillated for the past few months in response to mostly positive, but sometimes conflicting, US economic data. Overall, however, the Fed has been considered to be significantly more hawkish lately than the BoE in terms of openness to raising interest rates.

This comparative central bank outlook could either be reinforced or refuted based upon the statements issued by the Fed and BOE next week. If reinforced, GBP/USD could fall back towards its recent multi-year lows and potentially continue its well-entrenched bearish trend. If refuted, the currency pair could extend the sharp rebound that has been in place since the beginning of the month.

From a technical perspective, GBP/USD has currently stalled after reaching a major confluence of resistance around the 1.4250 level, the 50-day moving average, and the 50% Fibonacci retracement of February’s bearish run. This confluence of resistance has helped to hold the currency back in its recent sharp rise from late February’s 7-year lows below 1.3900. Within the current long-term downtrend, the 50-day moving average has served as a key dynamic resistance line for GBP/USD’s fall from late last year.

In the run-up to and after next week’s central bank announcements, these resistance factors will continue to be the area to watch on GBP/USD. With sustained trading below this resistance area, the key downside target continues to be at the 1.4000 psychological support level, followed by the major 1.3500 support level. To the upside, any extension of the current rebound above the noted resistance factors should be met by strong further resistance around 1.4500. 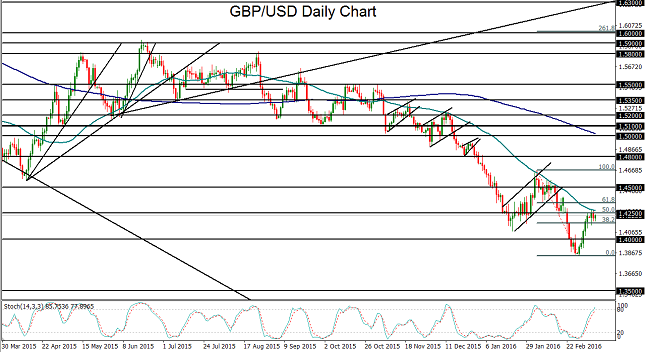