GBP/CHF breaks out ahead of UK data

Thanks to ongoing risk-on sentiment in the markets, the safe haven Swiss franc has fallen out of favour against several major currencies. Even the British pound is performing better than the Swissy, despite the delay in Brexit which has further increased near-term uncertainty.

Thanks to ongoing risk-on sentiment in the markets, the safe haven Swiss franc has fallen out of favour against several major currencies. Even the British pound is performing better than the Swissy, despite the delay in Brexit which has further increased near-term uncertainty. The GBP/CHF is therefore rising and will be interesting to see how it performs ahead of and after the upcoming UK data releases over the next couple of days. Tomorrow we will have the latest UK wages data followed by CPI a day later on Wednesday. The GBP could strengthen if these figures beat expectations.

From a technical point of view, the GBP/CHF could be about to stage at least a short-term rally. This pair has been putting in a few higher highs and higher lows since the start of the year, before the rally came to a halt in mid-March. Since then, it has been consolidating around its 50-day moving average. But it now looks like the consolidation phase could be over with price moving out of a bullish triangle pattern to the upside. With Friday’s high of 1.3130 broken, this level now needs to hold as support if the bulls are to remain in control this week. A possible rise towards the next potential resistance at 1.3240 would not come as surprise to us now. 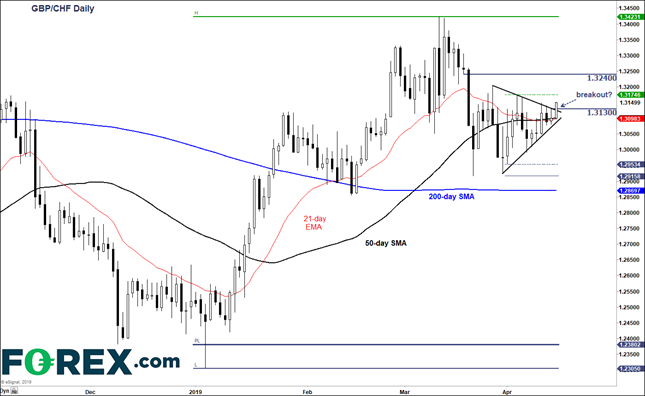