GBP/JPY: one to watch

As mentioned earlier, the GBP/USD has rallied hard into long-term resistance around the 1.40 area, which was the low hit just before the Brexit vote in June 2016. Like the cable, the GBP/JPY has also rallied sharply into its own corresponding pre-Brexit resistance level of 155.00. But unlike the cable, which managed to bounce back during the European session, the GBP/JPY has remained low. It has tracked the declines in the USD/JPY, as the dollar fell further today and yen rallied despite the fact the Bank of Japan Governor, Haruhiko Kuroda, insisting the central bank has not started to think about exiting from monetary easing. The markets had other ideas, though, as the yen pushed higher across the board. This could be because the BoJ’s dovishness was already priced in and the market believes that the 2% core inflation target will be hit by next year, as the BoJ predicts. Should the yen strengthen further then the GBP/JPY may be among the most pressurised yen crosses to watch, given that the pound has reached significant resistance levels against a number of currencies, including the US dollar.

But for us to turn bearish on the GBP/JPY we will first and foremost need to see the breakdown of some key support levels. Among them, 153.15 is the most important as this was the most recent low on the daily time frame prior to the latest rally to 155.00 resistance. If this 153.15 level breaks then we may see the sellers emerge in number. Otherwise, we will remain technically bullish with the next long-side objectives beyond 155.00 coming in at just below 155.80 and then 157.10, the 127.2 and 161.8 percent Fibonacci extension levels of the most recent drop. 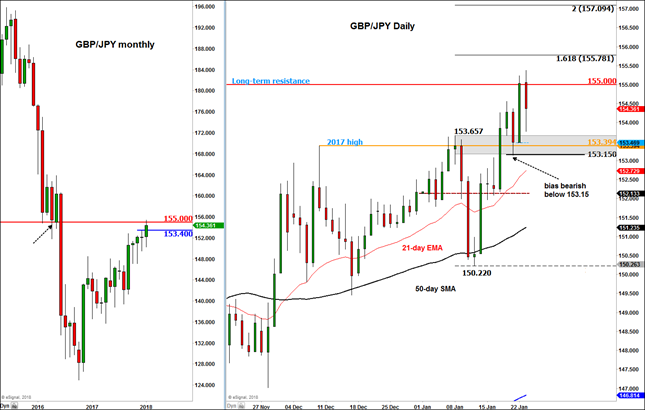