GBP/NZD set for a big breakout?

The GBP/NZD may not be everyone’s cup of tea but this oft-volatile pair could be on the verge of a big move. The pound has been finding decent support recently after the Bank of England dropped its dovish bias, while the kiwi has turned lower after the Reserve Bank of New Zealand warned of more rate cuts due to the strength of its currency.

The GBP/NZD may not be everyone’s cup of tea but this oft-volatile pair could be on the verge of a big move. The pound has been finding decent support recently after the Bank of England dropped its dovish bias, while the kiwi has turned lower after the Reserve Bank of New Zealand warned of more rate cuts due to the strength of its currency. Consequently, the GBP/NZD has surged back from its recent lows to trade between the pivotal technical area of 0.77 and 0.78. What happens next could determine the direction for days or even weeks to come.

The 0.77-0.78 range had been a key support area in the past which gave way a couple of days before the flash crash in early October. Since then, the GBP/NZD has been putting in a couple of higher lows. In the process, it has broken above a few resistance levels including 1.7450, a short-term bearish trend line and the 50-day moving average. The 1.7450 level needs to be watched, for if price were to break below it again this would weaken the short-term bullish trend and may lead to a drop back to 1.70.

However, I think the trend is turning bullish and our base case is that we will see a breakout above that pivotal 1.77-78 range. If so, this could lead to a sharp rally as the shorts get squeezed out willingly or by force and new momentum-chasing bulls step in. Some of the short-term bullish objectives in this potential scenario include the Fibonacci retracement levels at 1.8025 (61.8%) and 1.8475 (78.6%). But potentially, a much larger rally could come to fruition.

So there you have it: two clear scenarios, with some objectives to watch. But right now, the GBP/NZD is trading in no man’s land, so to speak. Conservative traders may therefore wish to wait for price to make its move and then trade in the direction of the break without forgetting their usual entry criteria, and more importantly risk and money management duties. 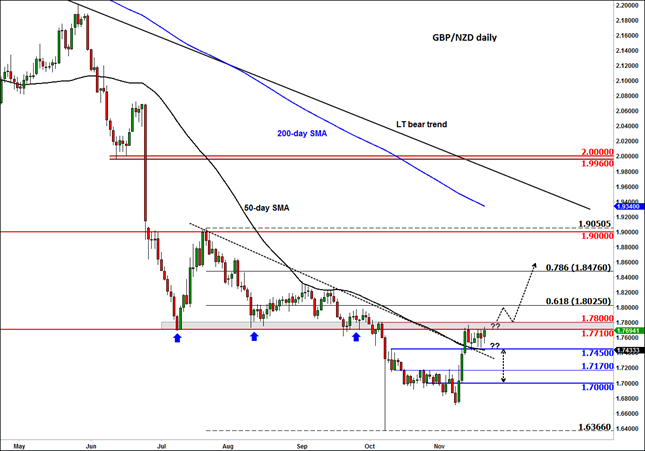