GBP/USD: After the flash crash, what will NFP do to cable?

Besides form the obvious question of what the actual hell happened to sterling overnight, there are so many other questions marks participants will be asking themselves. Has the pound now bottomed out, what exactly was the overnight “low,” what will the Bank of England do now? The pound’s crash has obviously overshadowed today’s supposed big event: the US non-farm payrolls report

Besides form the obvious question of what the actual hell happened to sterling overnight, there are so many other questions marks participants will be asking themselves. Has the pound now bottomed out, what exactly was the overnight “low,” what will the Bank of England do now? The pound’s crash has obviously overshadowed today’s supposed big event: the US non-farm payrolls report. This is scheduled for release shortly and the headline jobs report is expected to come in at around 170 thousand net jobs gained, which, if correct, would be slightly higher than the prior month’s total of 151 thousand. The unemployment rate is expected to have remained unchanged at 4.9% while the average hourly earnings index is seen rising 0.2% month-over-month. A strong set of data would reinforce expectations that the Fed will raise rates in December.

So the volatility for the GBP/USD pair is far from over. As things stand only a very weak set of US jobs figures might be able to help lift the beleaguered FX pair. That being said, the pound has become less sensitive to economic data of late and more so to the UK’s political situation. Thus, today’s jobs report may not cause the theoretical response in the cable like the old days.

From a technical stand point it is interesting to note the rejection of price at sub-1.20 area. First of all, this is a psychologically-important level and a target for Goldman Sachs, among several other analysts and traders. In close proximity to 1.20, there is also the 261.8% Fibonacci extension level of the price swing from the low of 1.3835 hit earlier this year to the high on the day of Brexit vote at 1.5000. The 261.8% is among the most extreme Fibonacci extension levels, where major lows or highs tend to form. In other words, it represents an extreme exhaustion point in the market. So I wouldn’t be surprised if we have already seen a low form in the GBP/USD now.

As things stand however, the technical bias remains bearish as none of the major resistance levels have been reclaimed yet, which is a prerequisite before sentiment potentially turns bullish on the GBP/USD. The point of origin of the overnight breakdown was at 1.2600, while the prior swing low was 200 pips higher at 1.2800. Until and unless the cable moves above these levels, bullish speculators should treat any bounces with extreme caution. The bears who have missed the overnight drop may still find opportunities here and there but probably not to that extent and in that manner.  The 5 min chart, in the inset, shows some levels where the cable has formed some intraday swing points – these could be interesting areas to watch when the US jobs report is published. 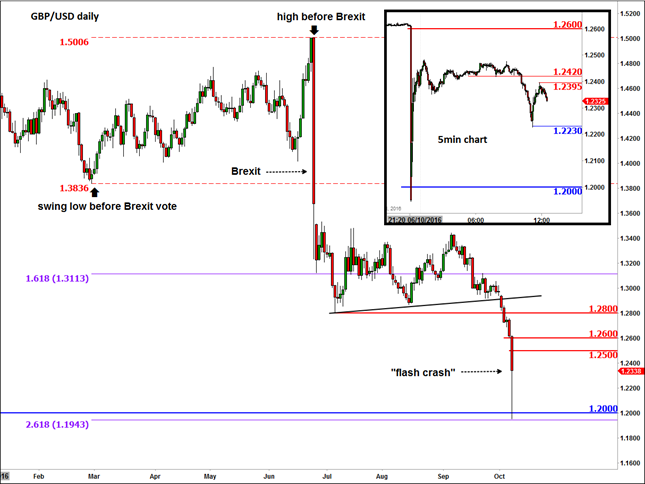