The GBP/USD finally hit that key 1.40 handle in overnight trading. This came after a sharp rally on Monday and on the back of a 5-week winning streak for the cable.

The GBP/USD finally hit that key 1.40 handle in overnight trading. This came after a sharp rally on Monday and on the back of a 5-week winning streak for the cable. Understandably, it ran into some offers at this psychologically-important hurdle amid profit-taking and opportunistic selling.  It remains to be seen, however, whether the pound will be able to push back towards and eventually through this hurdle, or if we have seen the top for now. After all, 1.40 represents a massive technical and psychological level, given that it was the base of the breakdown immediately after the Brexit vote. Once a long-term support level, could it now turn into a long-term resistance level?

Clearly, the impact of Brexit has been very mild on the UK economy so far, and it has been far from all doom and gloom in the way many had feared in the immediate aftermath of the Brexit vote. Technically, we still haven’t really left the EU, so the resilience of the economy and the pound’s comeback should not be too much of a surprise. But when we do, only then we can really find out what the real cost was to the economy. This uncertainty should keep the gains in check for the pound in the medium term, but it doesn’t necessarily mean the GBP/USD cannot climb above 1.40 again.

In any case, the pound will remain in focus this week as we will have a couple of official UK macro data coming up. On Wednesday, the ONS will release the latest average weekly earnings index. This is expected to print +2.5% in the three months to November compared to the same period a year ago – thus unchanged  from the October reading. The unemployment rate is also seen steady at 4.3% while jobless claims are expected to have risen by just 2,300 in December. Friday will see the ONS release the preliminary estimate of the fourth quarter UK GDP. The economy is expected to have expanded by another 0.4% on the quarter after a similar performance in Q3. Should the upcoming UK data beat expectations then we may see the pound break through the above-mentioned technical levels, while if the data comes out weaker then we may see sterling take a pounding. The key data from the US is Advance GDP on Friday. The world’s largest economy is expected to have expanded by 3.0% q/q on an annualized basis. 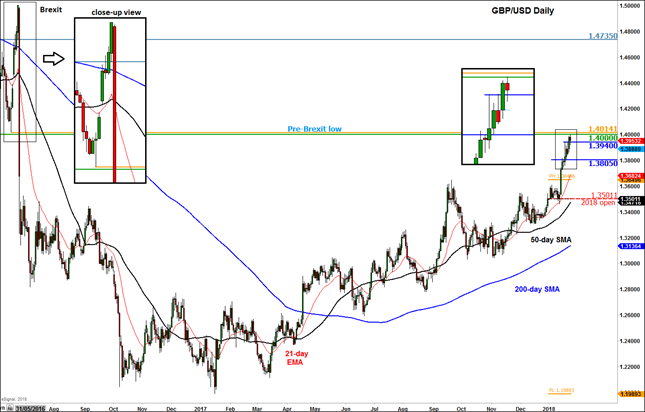