Just as we hit “publish” on last week’s GBP/USD update, traders’ tone toward the pair started to sour. The proximate catalyst for the reversal was a disappointing GDP report, but more broadly, the continued uncertainty surrounding a satisfying Brexit agreement is weighing on sterling bulls.

Today’s updates on the Brexit front have been…mixed. EU negotiator Tusk has reportedly told the UK government that the deadline for a November EU summit is Wednesday, though given the lack of unity in the Parliament, the odds are starting to shift toward a mid-December summit.

In all likelihood, this would push the “meaningful” vote into January, leaving a tight deadline for the remainder of the details to be ironed out by the end of March. That said, pound bulls got a boost on headlines that “the main elements of an exit treaty” were ready to present to the UK cabinet tomorrow, keeping hopes of a late November EU summit alive.

Technicals are understandably taking a back seat to Brexit developments of late, but broadly speaking, the pair remains within its established 1.2700-1.3300 range. Unless and until that range is broken, the situation favors short-term trades with tight stops in our view.

As you can no doubt surmise, the situation remains highly fluid, so we suspect this won’t be the last Brexit/GBP report we write this week! 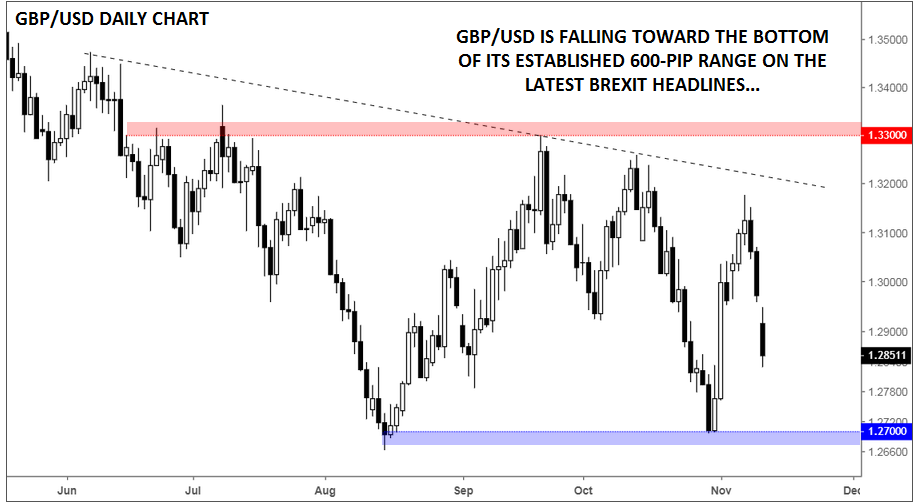