The greenback has got a little bit stronger and the Dollar Index is again trying to form a base around that 100 level. It looks like the EUR/USD’s rally has run out of juice, the USD/JPY has bounced back and now the cable could be the next domino to fall.

The greenback has got a little bit stronger and the Dollar Index is again trying to form a base around that 100 level. It looks like the EUR/USD’s rally has run out of juice, the USD/JPY has bounced back and now the cable could be the next domino to fall. This morning’s UK GDP figures surprised to the upside, yet the pound failed to respond positively to the news as it suffered in a typical “buy the rumour, sell the fact” type of a reaction, except that there were no rumours per se. Sterling has been appreciating noticeably in recent days as traders continued to unwind their Brexit trades – until today.

The economic outlook for the UK remains bleak even if the Brexit vote itself hasn’t had any material impact on the economy yet. The pound would do very well to get back to $1.40s again. The full impact of Brexit will not be felt for months – or even years – but the uncertainty will most likely prevent sterling from appreciating significantly in the interim. So get used to seeing see more chop and churn in GBP for the foreseeable future.

Meanwhile legislation paving the way for Theresa May’s government to start the process of leaving the European Union has been published after the Supreme Court ruled parliament’s approval would be necessary on triggering Article 50. MPs will debate on the Brexit process from Tuesday of next week. The pound could pause for breath ahead of the debate.

Now the pound may have carved out a long-term bottom at $1.20 as we reported earlier in the week. It could be on the way of hitting $1.30 in the coming weeks. BUT today, the bullish trend looks to have come to an end as far as the short-term outlook is concerned. The 4-hour chart of the cable, below, shows that price has respected resistance at the 1.2650 area – this being the last support pre breakdown (circled).  Consequently, it may pull back towards 1.2530-50 area (prior resistance) before potentially bouncing back. However a much deeper correction could be on the way if this area fails to hold as support. 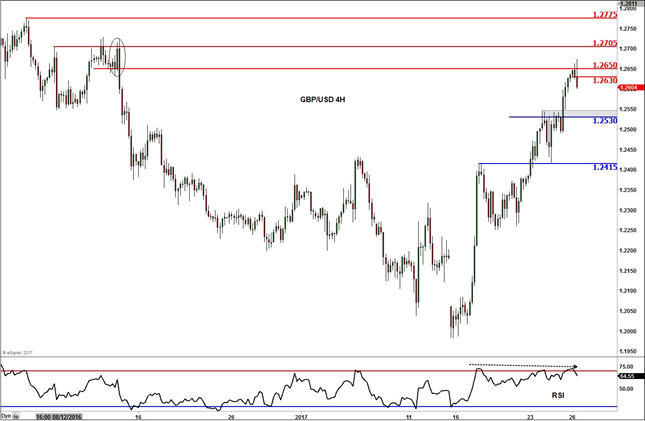