The GBP/USD started the day how it ended yesterday: higher. Speculators were still felling bullish after the stronger UK inflation figures had raised the prospects that the Bank of England may turn hawkish. However the gains were short lived as the cable headed back lower after UK average weekly earnings came in at 2.1% earlier versus 2.4% expected. This was the lowest level since late 2014.

The GBP/USD started the day how it ended yesterday: higher. Speculators were still felling bullish after the stronger UK inflation figures had raised the prospects that the Bank of England may turn hawkish. However the gains were short lived as the cable headed back lower after UK average weekly earnings came in at 2.1% earlier versus 2.4% expected. This was the lowest level since late 2014. It means that real wages are falling sharply now. At -1.2%, wages adjusted for inflation are at the lowest since mid-2014. Surely the BoE won’t ignore this and as such we are expecting it to maintain its dovish stance on Thursday and possibly in subsequent meetings too when you also take into account raised political uncertainty. As a result, the pound could remain under pressure against currencies where the central bank is turning hawkish.

But as far as the GBP/USD is concerned, there are two fundamental events to consider today from across the pond: US CPI and FOMC meeting. In the event US CPI is significantly weaker than expected and/or the Fed is more dovish than expected then the US dollar could tank and that in turn may support the GBP/USD. But the market is already expecting to hear dovish remarks from the Fed anyway, so anything in line with the expectations or slightly more hawkish from the Fed may actually underpin the dollar, and undermine the GBP/USD.

From a technical point of view, the GBP/USD looks like it has trapped the buyers again. After closing last week lower due, mainly, to the outcome of UK elections, any bullish moves in early this week was always going to be suspicious. The two inside bar candles from Monday and Tuesday were always going to draw the attention of breakout traders looking to go long once we moved out of the range. Sellers who had taken advantage of the plunge may have moved their stops to above the high of these candles to protect their positions from turning against them. Thus the area above the inside bars, specifically above the broken 1.2775 old support, was always going to represent a liquidity pool. The cable probed liquidity here this morning and evidently supply more than absorbed demand there as price wasn’t able to hold. The next area of liquidity is undoubtedly below the inside bar candles, where the buyers’ stop loss orders and sellers’ breakout orders are likely to be resting, specifically below 1.2640. So, price may crash into that area later on today, trap the sellers, and bounce from around the key 1.2595 support level (last resistance pre breakout). However another break above 1.2775 would put the bearish case to bed and in this case we may see the start of a move towards 1.30s again. 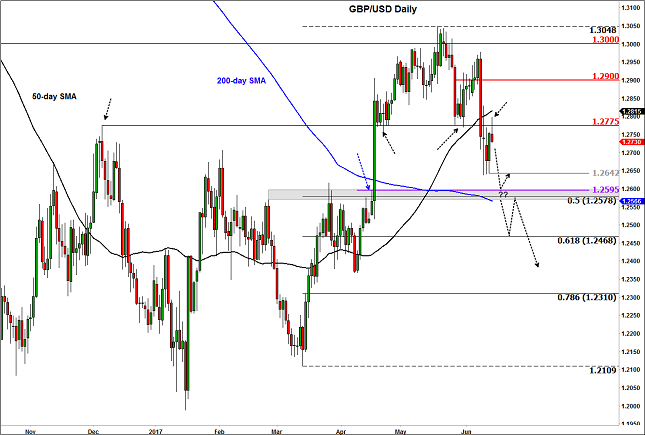