The next week and a half is going to be particularly important for the GBP/USD pair due to the sheer number of economic events from both the US and UK. Indeed, Thursday is going to be a very busy day: we will have the latest readings on retail sales, jobless claims, producer price index, industrial production, capacity utilization rate and Philly Fed and Empire State manufacturing indices all to look forward to then. But perhaps even more important for the markets will be Friday, when the latest headline and core Consumer Price Index (CPI) measures of inflation and a closely-watched consumer sentiment survey are released. Unsurprisingly, most of the focus will be on those CPI figures as they will be the last significant US data for policymakers at the Fed to base their decision on. So, while at the moment, the odds for a rate rise next week may be low, expect this to change once again should we see a sharp rise in inflation.

Meanwhile from the UK, the Office for National Statistics released the latest Consumer Price Index and other measures of inflation for August this morning. Headline and core CPI were unchanged at 0.6 and 1.3 per cent year-over-year respectively, disappointing forecasts for a 0.1 percentage point increase in both. Other measures of inflation were also weaker-than-expected, as the Retail Price Index (RPI) eased to 1.8% year-over-year from 1.9%; PPI input prices rose by just 0.2% month-over-month and output prices increased 0.1%. As a result of the soft inflation figures, the pound fell across the board this morning, including against the dollar.

UK wages and employment figures on tap for Wednesday

But will we now see a rebound ahead of the UK employment and wages data on Wednesday, and then the Bank of England’s latest policy decision plus minutes from its last meeting, on Thursday? The ONS reports wages over a 3-month period and this particular one will cover the months of May, June and July – so there will be an element of Brexit-related uncertainty built into this. But as most other July figures have been positive, the wages data could also surprise to the upside and better the 2.1% 3m/y expected reading. In fact, wage growth has been a bright spot for the UK consumer in the last couple of years, which, as well as the weaker pound, has helped to boost inflation from around zero for most of 2015. Any further improvement in UK data, especially wages, could see the BoE start to sound more upbeat about the economic outlook once again. The pound could jump sharply if the central bank hints strongly that there won’t be any further rate cuts for the foreseeable future.

Today, though, the Cable is hanging by a thread: it has given up almost the entire sharp gains made yesterday. But at the time of this writing, the GBP/USD was testing a key short-term support range between 1.3220 and 1.3250, so there was a possibility that it would bounce back here. As can be seen on the 4-hour chart, below, this is where the previous support meets the base trend of the bullish channel and the 38.2% Fibonacci retracement of the most recent upswing. Given the number of technical factors converging here, a potential bounce here would not come as a surprise to us. But if the cable breaks below here, then the next stop could be at the 1.3135-55 range – previous support and 50% retracement level – or further lower around 1.3085, which corresponds with the 61.8% Fibonacci retracement. Meanwhile on the upside, the key levels of resistance to watch are around 1.3335 and then 1.3370/5 – a potential break above the latter would be a particularly bullish scenario. 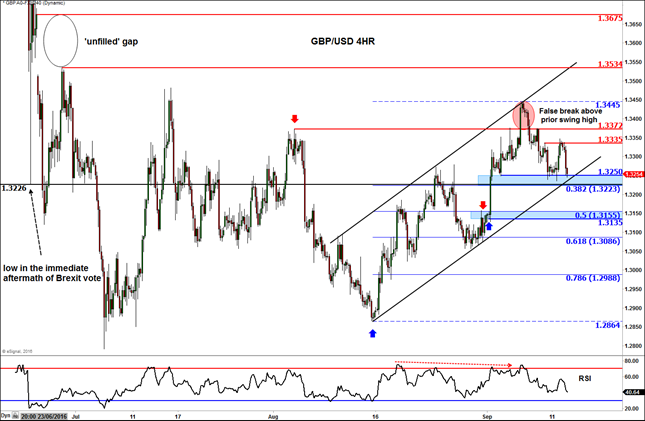