The pound was hit by a double whammy of bad news this morning.

The pound was hit by a double whammy of bad news this morning. First and foremost, it was reports that the UK government will block the EU transition extension beyond 2020, raising concerns that this could potentially result in a hard Brexit. Then, the latest wages data came in below expectations while unemployment claims grew more than anticipated. As a result, the GBP/USD further extended its post-election losses to hit a low so far of 1.3156. But at the time of writing, the cable was coming off its worst levels as the buyers attempted to defend a key short-term support level around 1.3180.

No extension to Brexit transition period

The pound fell and UK Brexit-linked stocks took a hit this morning after Boris Johnson said there will be no extension to the transition period. Investors were worried that this may mean the UK could still crash out of the EU without a trade deal. The Prime Minister was previously expected to extend the end of 2020 deadline, so that the government would be able to negotiate a good trade deal given that so much time had been wasted during this year.

The pound was also hit by disappointing UK data. Weekly wages increased by 3.2% year-on-year in the three months to October. This was weaker than 3.4% expected and was down from an upwardly revised 3.7% in September. Jobless claims also disappointed at 28,800 vs. 21,200. However, the unemployment rate remained steady at 3.8%, beating forecasts for a rise to 3.9%. Meanwhile, a closely-watched survey of about 550 manufacturers asking respondents to rate the relative level of order volume expected during the next 3 months, fell further below zero to indicate expectations are for lower order volumes. CBI’s Industrial Order Expectations index printed -28 vs. -25 expected and -26 last.

Coming up: US data dump and UK CPI

The focus for GBP/USD market participants will turn to the data dump in the US later, when we have the latest Housing Starts, Building Permits, Industrial Production, JOLTS Job Openings and IBD/TIPP Economic Optimism figures. Then the focus will return back to the UK as the latest inflation data is published on Wednesday morning. UK CPI is seen falling further below the Bank of England’s 2% target to 1.4% from 1.5% previously. Core CPI is expected to have remained unchanged at 1.7%. And RPI is seen edging down to 2.0% from 2.1% last. 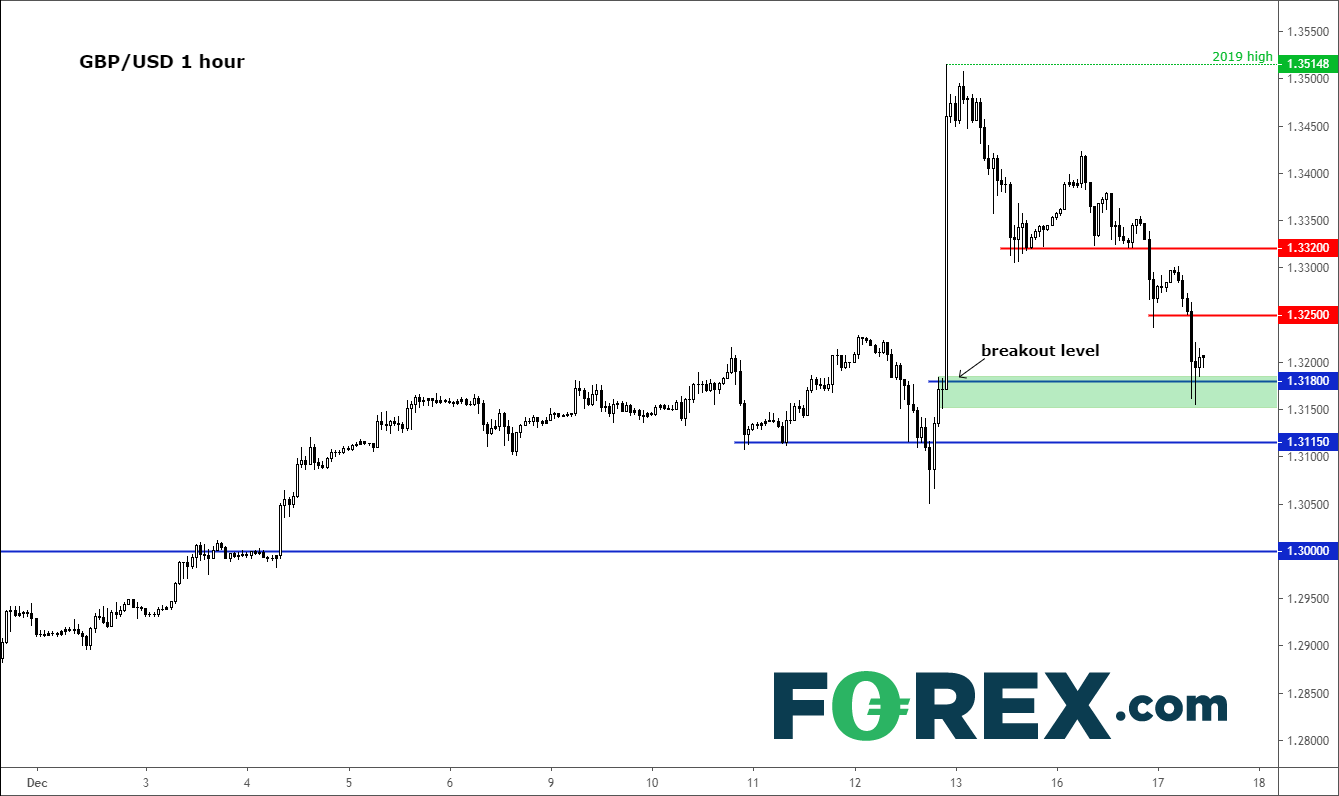 The cable was clinging onto key support around the 1.3180 level at the time of writing. As per the hourly chart, this was the breakout area when the exit polls were released on Thursday night. The big jump from this level meant that price had effectively gapped higher, but it has now returned to fill this inefficiency. Therefore, if support holds here, then it is reasonable to expect price to stage its next up leg in the days ahead.  However, a failure and we could be talking about 1.3000 again. Short-term resistance comes in at 1.3250, followed by 1.3320. These levels were formerly support.