I am not going to bore you with Brexit again but it is continuing to dominate the domestic headlines. The EU has published a draft Brexit treaty today, in which it has proposed a “common regulatory area without internal borders” on the island of Ireland covering customs, VAT, energy, agriculture and other sectors if other solutions cannot be found to avoid a hard border. There’s still a lot of work that needs to be done and the EU is hoping that the proposals will help speed up negotiations. Indeed, as Michel Barnier, the EU’s top Brexit negotiator, yesterday said, significant points of disagreements remain with the UK over the transition period. Today he added that “If we wish to make a success of these negotiations we must pick up the pace,” in an apparent expression of frustration with Davis Davis, his British counterpart.

The long and short of all of this is that the ongoing Brexit uncertainty continues to undermine the pound. Sterling would otherwise be a lot higher given that the Bank of England has recently turned hawkish amid the recent improvement in UK data and rising levels of inflation. So it remains to be seen if the pound will respond to the upcoming data releases this week with the manufacturing PMI coming up tomorrow and construction PMI due out on Friday. But the focus will surely be on UK PM Theresa May who is due to speak about Britain's post-Brexit relationship with the European Union, in London, on Friday.

Ahead of the above events and as per our recent bullish dollar articles, the GBP/USD is another pair that increasingly looks to be on the verge of a drop. Not only is the dollar index respecting a long-term support level, the pound has recently reached its pre-Brexit levels against the dollar and the yen, too. Given its sharp sell-off back in June 2016 from these levels, the pound is again showing signs of weakness as the buyers who picked up the dips take profit, while those that missed out on the 2016 sell-off are probably trying to take advantage of another drop this time. The cable’s struggles to get past its pre-Brexit levels of around the 1.40s has been apparent. It has recently formed a few lower highs and a lower low around these historic resistance levels. Thus, we continue to think that a drop towards 1.3650 – the 2017 high – could be on the cards in the coming days. To get there, the GBP/USD will first need to drop below 1.3860 short-term support. If there’s acceptance below this level then there’s not a lot of further reference points until that 1.3650 levels. Longer-term support levels include 1.3550 and the 2018 opening price level of 1.3500, which is also a psychologically-important level.  Speaking of psychological levels, we would be quick to drop our short-term technical bearish views in the event the cable goes back above the pivotal 1.40 level again – specifically if the 1.4065 recent swing high breaks. 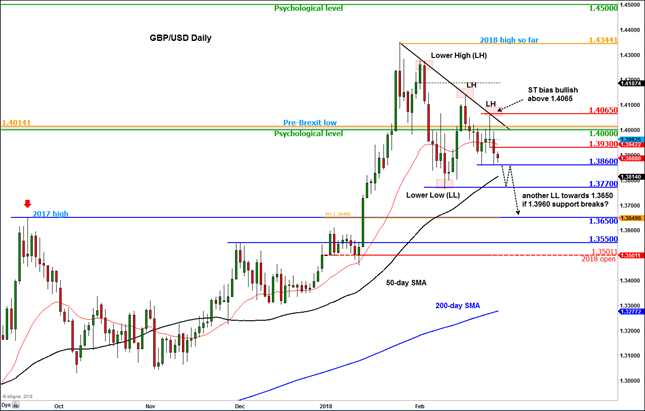