The GBP/USD has hit a fresh post-FOMC high this afternoon. Like the Bank of Japan and Swiss National Bank, the Bank of England decided to keep its monetary policy unchanged. BUT it wasn't a unanimous decision as Kristin Forbes voted for a 25 basis point rise amid concerns over inflation. This caused the pound to jump across the board.

Indeed, as we reported the possibility on Wednesday (click HERE for details), the GBP/USD has in fact staged a relief rally as it heled that key support in the 1.2140-80 area. The clue was there with the cable creating lots false breakouts in recent months, trapping traders in one direction before going the other. The most two obvious examples of this can easily be seen on the chart around 1.20 in mid-January (when sellers were trapped) and around 1.27 in February (when buyers were trapped). Another such trap was set for the sellers on Tuesday when the cable momentarily broke below the 1.2140 support level before bouncing back sharply. Since then, the GBP/USD has broken several resistance levels, including the 1.2245-65 range today. If this level holds as support now then we may see a move back towards the upper end of the wider range again. In the more immediate outlook, there is potential resistance around 1.2375-1.2405 area. This range was previously resistance. If the cable doesn’t turn here then the next bullish objective would be around 1.2545-1.2580. 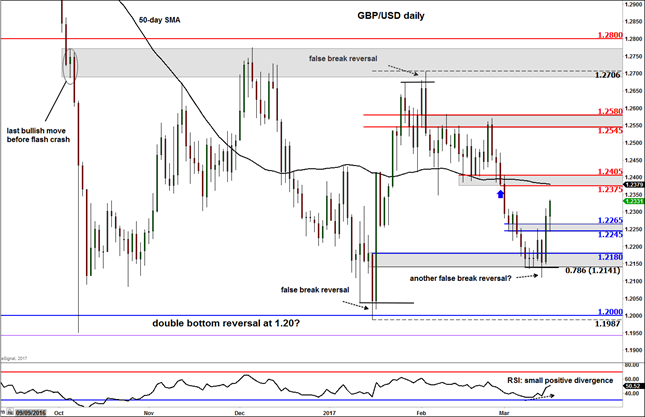