The UK economy ended last year with a stronger-than-expected growth of 0.5% in the fourth quarter.

The UK economy ended last year with a stronger-than-expected growth of 0.5% in the fourth quarter. However, growth in 2017 as a whole was still the weakest in five years at 1.8%. The pound, already higher on the day, extended its gains on the back of the data. It remains to be seen however whether we will see new highs for the GBP/USD. The dollar had been falling sharply in recent days until a sharp turn-around late in the day yesterday after US President Donald Trump said he wanted the currency to rise, as this would be a sign of strength in the US economy. Dollar ripped but it ultimately failed to find any further buying interest and eventually started to head lower again. It has now given up most of its gains again as market participants made a more sober assessment of Trump’s comments, knowing full well that words alone are not enough to change the course of a trend. But with the Dollar Index dropping to a significant long-term support, there is always the potential we will see some bottom-picking and short-side profit taking in the coming days. Today, the dollar will have a chance to potentially make a comeback in the event US GDP also beats expectations. The world’s largest economy is expected to have risen 3.0% in the fourth quarter on an annualised basis. So, the dollar bulls will be hoping to see a figure higher than 3.0%. Even if the data disappoints, one could argue that the downside could be limited for the severely oversold dollar.

So, the GBP/USD may struggle to go further higher. From a technical perspective, it does look quite overbought, at least judging by the RSI indicator. But there is no doubt that the trend is bullish at the moment, so any dips could be bought, until there is a break in market structure of higher highs and higher lows. The next key support is at 1.4000/15 area, should yesterday’s low at 1.4083 give way. There are no obvious resistance levels until the next psychological hurdle of 1.4500, but yesterday’s high at 1.4345 is also a key level to watch closely going forward, given the sharp reaction from that level. 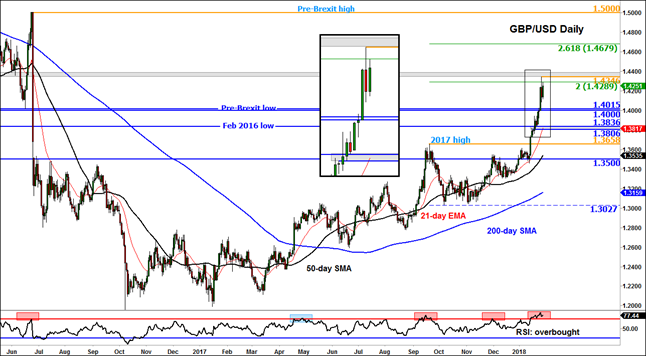