The jam-packed calendars for economic data and political events means it is going to be a very busy week in the financial markets, perhaps the busiest of the year so far.

The jam-packed calendars for economic data and political events means it is going to be a very busy week in the financial markets, perhaps the busiest of the year so far. This implies that the focus will be short-term with the longer-term themes likely to take a back seat. But the busy week has started quite badly for the GBP/USD after the release of some poor UK economic data earlier today. The data revealed an unexpectedly sharp drop of 1.4% in UK manufacturing production in April, causing industrial production to decline 0.8% month-over-month, while construction output rose by a modest 0.5% instead of 2.4% expected. The cable dropped below 1.3350, before bouncing back ahead of more important issues later on in the week.

Tomorrow we will have the latest UK labour market data, which includes wages, and US inflation report for the month of May. In addition, Prime Minister Theresa May’s Brexit legislation will return to the lower House of Commons on Tuesday after receiving a battering in the upper House of Lords. It is expected that ministers will try to overturn most of those defeats with lots of compromises to win the support of rebel pro-EU lawmakers. The debating and votes will take two days which means we will find out on Wednesday what kind of a vote will Parliament get on the final Brexit deal, and whether the UK should be trying to stay in a customs union.

Wednesday will also see the release of UK inflation report which should provide some volatility for the pound. In addition, there is the small matter of a Federal Reserve rate decision later on in the day on Wednesday. The Fed is almost certain to raise rates for a second time this year. But the key question remains: how many more hikes will there be for the rest of the year? In the FOMC press conference, Fed Chairman Jerome Powell could hint at the prospects of two more hikes following the recent improvement in US data. His FOMC colleagues will have updated their projections on interest rate direction and timing in the so called dot plots. If there is indeed a general tilt towards four increases in 2018 as a whole, this should give the dollar another shot in the arm, as previously the Fed had hinted at three rate increases for the year.

The busy week for the cable will effectively draw to a close on Thursday when the latest retail sales data from both nations are published a few hours apart. But the damage will have been done by then by the preceding events and these sales figures are unlikely to be game changers for the cable.

By Thursday, the technical outlook for the GBP/USD will have become clearer too. At the moment, the cable remains stuck in a small range around the 1.34 handle and below key resistance in the 1.3460-1.3500 area, after staging a small recovery in the past couple of weeks. But the path of least resistance is still technically to the downside and will remain that way until and unless there’s a break in the market structure of lower lows and lower highs. The most recent swing high was at 1.3610 and so if and when price goes above this level, it will have crossed the invalidation level for many bearish speculators, tipping the bias to bullish. 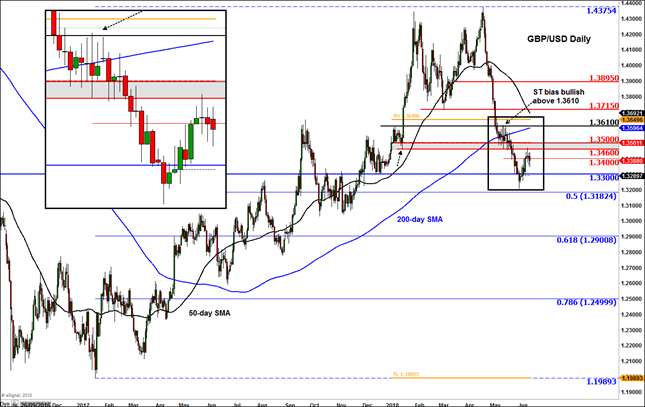