GBP/USD rebounds ahead of FOMC

Ahead of the upcoming Fed meeting tomorrow, the dollar has reminded volatile but generally on a weaker footing.

Ahead of the upcoming Fed meeting tomorrow, the dollar has reminded volatile but generally on a weaker footing. At the time of writing, it was still down on the day against the euro and pound, but off its worst levels. Against the yen, it was still higher, but off its best levels. It was trading mixed against commodity currencies, while buck-denominated gold and silver were both higher on the day.

It would be a massive surprise if the Fed does not raise interest rates tomorrow. As a rate increase is highly likely, and therefore priced in, the reaction of the dollar will be influenced to a large degree by the Fed’s forward guidance and whether there are any noticeable changes in the dot plots.  You can read our FOMC preview, written by my colleague Matt Weller HERE.

While a dovish surprise could exacerbate the dollar’s selling, we would equally not be surprised if it actually stages a rebound following its recent weakness. If the greenback were to come back, its best bet would probably be against currencies it is already doing well against – such as the Japanese yen.

Pound not so Brexit-hit after all, but let’s not jump into any conclusions yet

But what about the supposed-to-be Brexit-hit British pound? The GBP/USD slumped on Friday in the wake of the EU’s Salzburg summit and a defiant speech from UK PM Theresa May in which she acknowledged Brexit talks had reached “an impasse.” The optimism that had supported the pound in recent weeks was gone in a flash. However, there was no immediate follow-through in the selling pressure at the start of this week, with the GBP/USD and all other pound crosses rising across the board on Monday, before pushing further higher today.

With the FOMC meeting on tap next, let's see if Friday's big down move was a big bear trap for the cable or we get some downside traction once again. Well, following yesterday’s rebound, the pound has formed daily inside bar formations against her big rivals, including the yen and dollar. While these patterns point to range contraction, they could also give bulls false hope that a low has been created. It is important to see what happens next in order to gauge the pound’s next directional move.

The inside bar pattern draws lots of different market participants around the range extremes. To give you an idea what might be happening, it is likely that some of the GBP/USD sellers have lowered their buy stop orders to just above Monday’s high (the inside bar pattern was formed on the daily chart of the GBP/USD) around 1.3165, while breakout buyers might have gone or are looking to go long once price is above Monday’s high, again with buy stop orders. Similarly, those who bought the dip are likely to have placed their protective sell stop orders just below Monday’s low around 1.3065, while breakout sellers may have also placed some stop sell entry orders there too.

Thus, there is likely to be a huge volume of resting liquidity above and below Monday’s range. If we now get acceptance above Monday’s high, then the inside bar in this case will likely be a genuine bullish signal. However, we could be seeing a typical failure of those inside bar formations on pound crosses. If the pound struggles to hold above yesterday’s highs and we go back within the range then in all likelihood, the next stop for the pound would be the liquidity that is now resting below Monday’s low (i.e. stops from those that tried to pick the bottom). However, if yesterday’s low was a genuine bottom then price should not get anywhere close to it again for the foreseeable future. 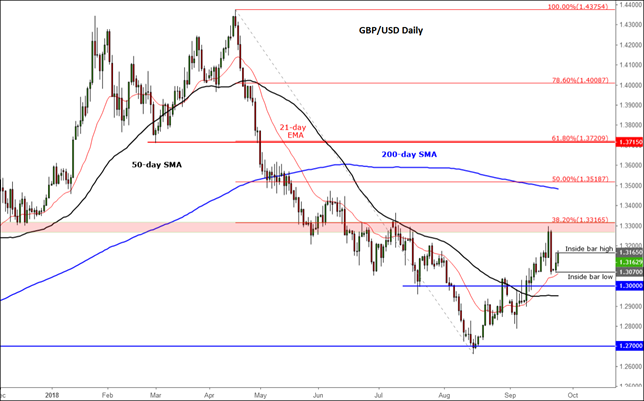