The latest UK earnings data was released this morning and unfortunately nominal wages fell again which meant that real incomes declined further. However, the headline 1.8% reading, which was down from 2.1% previously, was bang in line with the expectations.

Over the past week and a half, market participants have been forced to reduce their Bank of England rate hike expectations due to the recent soft patch in UK economic data. Last week for example saw the UK economy suffer a hat-trick of weaker-than-expected PMIs while manufacturing production and construction output came in significantly weaker than expected. Investors must have wondered whether the Bank of England’s recent tilt towards the hawkish side was a bit premature. Given the renewed weakness in data, would they tolerate the rise in inflation by keeping rates on hold for longer? One of investors’ key concerns is the fall in real wages as the pace of inflation sharply exceeded that of nominal wages growth.

The latest UK earnings data was released this morning and unfortunately nominal wages fell again which meant that real incomes declined further. However, the headline 1.8% reading, which was down from 2.1% previously, was bang in line with the expectations. What’s more, earnings excluding bonuses actually rose to 2.0% in the three months to May from 1.8 per cent previously. On top of this, the unemployment rate dropped to a new 42-year low of 4.5% as employment rose by an above-forecast 175,000. Meanwhile jobless claims rose only by 6 thousand applications in June, lower than 10.5 thousand expected. This leading indicator of the jobs market bodes well for employment but says nothing about wages though.

Today's latest jobs and wages data was overall better than expected, which has alleviated some of the concerns about the falls in real wages. But the key question remains: will the Bank of England maintain its recent hawkish rhetoric? I think it will, and I therefore expect to see higher levels for the pound against some of her weaker rivals, including the US dollar.

In fact, the GBP/USD has already bounced off a key support level we highlighted in this week’s Live Trading Session webinar on Monday. The 1.2815 level was the last resistance prior to the breakout on June 28. Once resistance, this level has turned into support, at least for the time being anyway. At the time of this writing, the cable was testing last week’s low and resistance at 1.2865/70 area. Last week, the cable had created an inside bar pattern on its weekly chart following a large rally the week prior. These patterns typically trap traders before the trend resumes in the underlying direction (to give you an idea, see the EUR/GBP’s daily chart and price action since Monday). If this turns out to be an inside bar failure pattern then the GBP/USD could head towards and possibly beyond 1.3000 in due course – perhaps similar to how the EUR/USD cleared its own key level of 1.1300 at the end of June. All that being said however, I would drop my bullish view in the short-term if the cable closes the week below the 1.2815 support level. 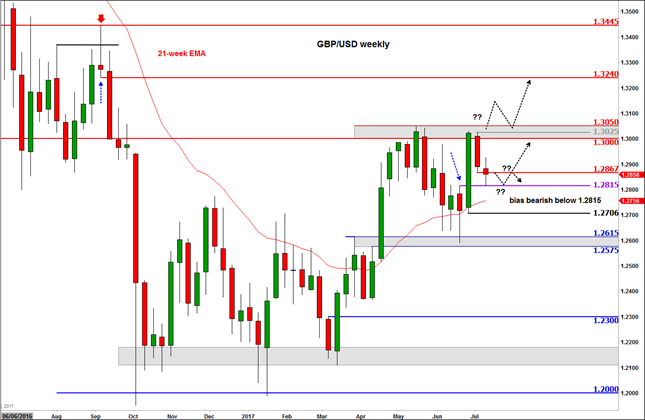