GBP/USD slides to 1.30 again ahead of NFP

The cable’s losses over the past two days have been due mainly to a rebound in US dollar than weakness in pound, with other GBP crosses remaining near their recent highs.

Earlier this week, we wrote that the GBP/USD was approaching resistance ahead of key events, which included the Federal Reserve’s rate decision on Wednesday, the Bank of England’s so-called Super Thursday and the US monthly jobs report later today. Well, as it turned out, the cable has indeed retreated from that resistance area we highlighted circa 1.3080 and is now back below the 1.3000 handle ahead of the publication of US nonfarm payrolls report shortly. News that UK services sector returned to growth in April has been shrugged off, since the PMI’s 50.4 reading was bang in line with the estimates and in any cases remains near stagnant (i.e. of 50.0).

The cable’s losses over the past two days have been due mainly to a rebound in US dollar than weakness in pound, with other GBP crosses remaining near their recent highs. The market was positioned for a more dovish FOMC on Wednesday but as this was not the case – with the Fed Chair Jay Powell merely reiterating the central bank’s data-dependent stance – the dollar bears have rushed for the exits with the implied odds of a 2019 rate cut going to around 50% from around 75% it reached at one point on Wednesday. Thus, if we get a stronger-than-expected US jobs report today, then this could help to accelerate the dollar’s rally and lead to a decisive breakdown in the GBP/USD. Conversely, a very poor set of figures today could derail the buck’s rally once and for all.

From a technical point of view, the fact that the abovementioned 1.3080 resistance has held its own means that the path of least resistance continues to be to the downside for the GBP/USD, especially given the break of the 1.3020 support level today. The next potential support is approaching around 1.2980 where the backside of the broken bearish trend line meets with the 200-day moving average. But should that area also break down then rates could go on to dip below the April low sub 1.2890. The bulls, meanwhile, will be hoping that the cable will finish today back above the 1.3020 short-term pivotal level. Ultimately, though, the most recent high at 1.3130/5 area needs to break to tip the balance back in bulls’ favour. 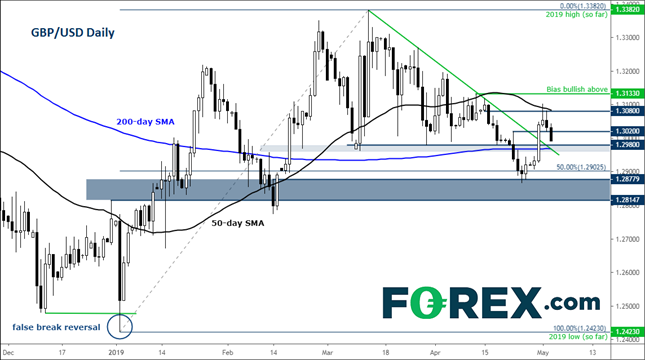