The pound has started the new week how it ended the last one: weak. The latest slide has been in response to comments from UK Prime Minister Theresa May at the weekend, when she said Britain’s exit negotiations will “not be about keeping bits of membership.”

The pound has started the new week how it ended the last one: weak. The latest slide has been in response to comments from UK Prime Minister Theresa May at the weekend, when she said Britain’s exit negotiations will “not be about keeping bits of membership.” May’s comments suggest it will be a hard exit from the EU, as Britain seeks to control immigration and law-making among other things. Though the Brexit vote has only had a limited impact on the economy thus far, the uncertainty could weigh on business spending in the months ahead. Indeed, the resignation of Britain’s top official in Brussels last week has raised question marks over the government’s self-imposed deadline of triggering the official EU exit clause by the end of March. The real impact of Brexit will not be known until after the fact. So, things could look and feel a lot different in the months and years ahead. But the markets are forward-looking by nature and a lot of the negativity has been priced in. Some would argue even that the markets may have overreacted as the economic implications of Brexit may not be as bad as many fear, so the pound should not be this “cheap.”

Indeed, the Bank of England’s chief economist and member of the Monetary Policy Committee (MPC) raised a few eyebrows last week by admitting they were wrong on Brexit. Mr Haldane said: "If you look at how the British consumer performed in the course of last year, it's almost as though the referendum had not taken place… In terms of many of the real things like pay and jobs, not very much happened during the course of last year, it's pretty much business as usual."

Mr Haldane’s admission of being wrong should be applauded rather than laughed at. Not many people have the humility to admit that. But more to the point, being wrong on Brexit means the Bank’s policy response was, at best, ill-timed. The BoE not only cut interest rates to another record low rate of 0.25%, it expanded the size of its QE programme too. The danger of moving this early was not only did the Bank leave itself little further ammunition but there was a danger of overcooking inflation.

But as things haven’t turned out as bad as initially feared, could the BoE now do a surprise U-turn and raise interest rates later this year? I personally don’t see that happening any time soon, though I do think that we have reached the nadir of extraordinary loose monetary policy in the UK. Thus, when the UK government finally triggers Brexit Article 50 to start the formal process of leaving the EU, the BoE may not necessarily further loosen its policy further in response. The weakness of the pound and the rising prices of oil means inflation could easily overshoot the Bank’s 2% target. Although Mark Carney, the BoE Governor, has indicated that the MPC will tolerate a temporary rise in price levels, it will become hard to justify maintaining that policy if inflation remains high for a long period of time. Thus the MPC may be forced to tighten its belt in order to prevent inflation turning into an unlikely period of hyperinflation, which will be very costly for the economy.

Technical outlook: potential for a bounce

If this view is correct, then the pound should start to get its mojo back in the coming months. In the short-term however the technical outlook on the GBP/USD looks rather bearish as it continues to make lower lows and lower highs within its 3.5 month consolidation period. But with the cable now at the lower end of its range, the probability of seeing a bounce rises at an increasing rate by each passing day. In fact, the GBP/USD reached a Fibonacci support area between 1.2125 and 1.2135 earlier today. This area is the meeting point of the 78.6% retracement of its post flash crash bounce with the 127.2% extension of the bounce from Tuesday. At the very least, the cable may stage a short-term bounce here. But potentially, it could form a significant low at or around here given that this Fibonacci convergence area resides inside a previous support zone between 1.2085 and 1.2150. It is also worth pointing out that the flash crash in October may have seen the pound form a significant low. Thus, the weakness observed now could merely be a (deep) pullback against that low, providing the so called smart money another opportunity to reload their long positions.

So, we are looking for the cable to put in a low at or around these levels, though if it creates a new low below the flash crash nadir of 1.1950 then that would clearly invalidate our view. What the bulls would want to see now is a close back above 1.2200 broken support, which could fuel a bounce to the next key resistance in the 1.2270/2320 range. If the latter then fails to hold the cable down then we could see the onset of a much larger recovery. But at the moment it is far too early to talk about the bullish objectives as we haven’t see a significant reversal pattern yet – though it could be just a matter of time. 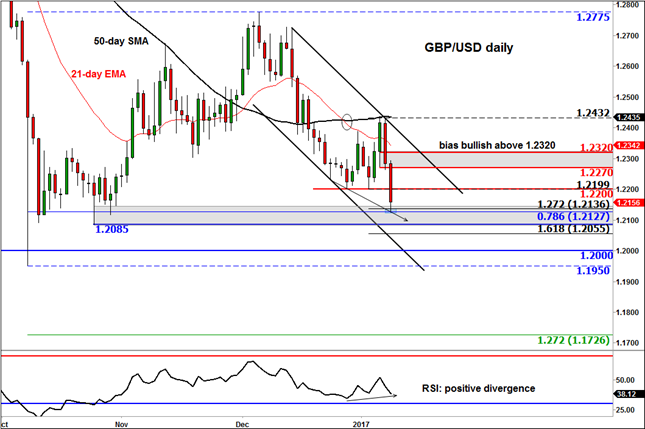