GBP/USD stuck between a rock and a hard place

On this day of last week, the pound had rallied by a cool 300 pips against the US dollar as investors welcomed news of a snap election in the UK, announced by UK Prime Minister Theresa May. Market participants apparently came to the conclusion that Theresa May will have a stronger mandate to secure the UK’s EU exit from the EU as she will be able to push back hard deadlines for a trade deal until the next election in 2022, assuming she wins this one. But after that sharp rally, the GBP/USD’s ranges have contracted sharply.

On this day of last week, the pound had rallied by a cool 300 pips against the US dollar as investors welcomed news of a snap election in the UK, announced by UK Prime Minister Theresa May. Market participants apparently came to the conclusion that Theresa May will have a stronger mandate to secure the UK’s EU exit from the EU as she will be able to push back hard deadlines for a trade deal until the next election in 2022, assuming she wins this one. But after that sharp rally, the GBP/USD’s ranges have contracted sharply. In part, this has been due to the lack of any fresh fundamental stimulus from both the UK and US, with the next key data being GDP form both nations, released on Friday of this week. But investors have also been making a more sober assessment of the situation as they know full well that in reality things might turn out differently post-election, as US investors are starting to find out with regards to Donald Trump. Clearly, Brexit-related uncertainty will remain in place for a while yet. After all, we still don’t know, for example, what type of a trade deal the UK will get from the EU. Thus, it can be argued that last Tuesday’s upsurge in the pound may have been a bit of an overreaction.

Still, in the short-term, the fact that the GBP/USD has managed to hold its own relatively well so far in the month cannot be ignored. Clearly if last Tuesday’s rally was an overreaction then the market should have corrected itself by now? Lots of questions remain. Speculators may therefore be better off trading short-term levels until the cable makes a more decisive move outside of its current ranges.

Indeed, as the daily chart shows, below, the GBP/USD is basically stuck between a rock and a hard place. Resistance is provided by 1.2866-1.2920, the last support range prior to the drop that eventually led to the flash crash. Support, meanwhile, has been provided by 1.2770, the top of the prior resistance range. The eventual breakout outside of this 1.2770-1.2920 range could lead to sizeable moves in the direction of the breakout (unless it is a false move, which is another story). If the support level gives way, then price may initially drop to the next reference points at 1.2705 followed by 1.2595-1.2620, levels which were formerly resistance. Meanwhile if the resistance gives way then the cable may initially rise towards 1.30, the next psychologically-important level, before deciding on its next move. 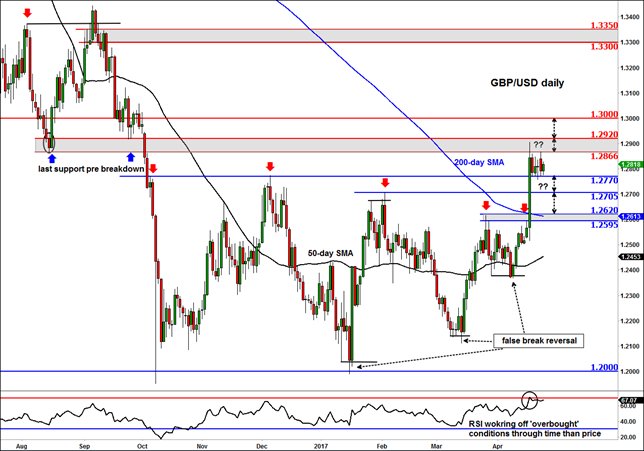