The US dollar is rising against all of its major rivals today…except for the British pound (maybe it was Theresa May’s dance moves?).

After stellar economic data, including a 6-month high in ADP Non-Farm Employment and the highest ever reading in the ISM Non-Manufacturing PMI Employment subcomponent, investors are anticipating a strong Non-Farm Payrolls report on Friday. Accordingly, we’ve seen US yields rise across the board, with the benchmark 10-year Treasury bond now yielding 3.18%, its highest level since July 2011, and the 30-year Treasury yield rising to 3.34%, the highest since September 2014.

Indeed, the US dollar is rising against all of its major rivals today…except for the British pound (maybe it was Theresa May’s dance moves?). In all seriousness, Britain’s Prime Minister generally “stuck to the script” in her speech to the Conservative party house, stating that she “will not let the country down on Brexit” and that “ruling out a no deal exit would weaken the UK’s negotiating position.” The slight weakness over the last two weeks notwithstanding, investors still believe that the EU and UK will ultimately reach an agreement to avoid a so-called “hard” Brexit scenario, so headlines will continue to drive the pair over coming weeks and months.

Technically speaking, GBP/USD’s outlook depends on your timeframe. Since peaking near 1.4400 in April, the pair traded down more than 1,700 pips through the summer to hit a low around 1.2660 in mid-August, clearly establishing the longer-term bearish momentum. The pair has since bounced back modestly, topping out near resistance at 1.3300 last month before pulling back to the nascent bullish trend line near 1.2950 as of writing.

Whenever longer-term and shorter-term trends conflict, it’s generally a good rule of thumb to defer to the longer-term trend. After all, it takes more traders, trading more money, for longer to create a long-term trend. That said, all trends eventually come to an end, so traders should always be wary of a market reversal.

Apply the above thought process to GBP/USD, a break of the near-term bullish trend line and yesterday’s low around 1.2940 would suggest that the longer-term bearish trend may be resuming for a test of previous support levels at 1.2800 and 1.2660. As long as the week’s low holds however, the pair could see a bounce to unwind a portion of the recent selloff. That said, longer-term traders may maintain a bearish bias below strong resistance in the 1.3300 zone. 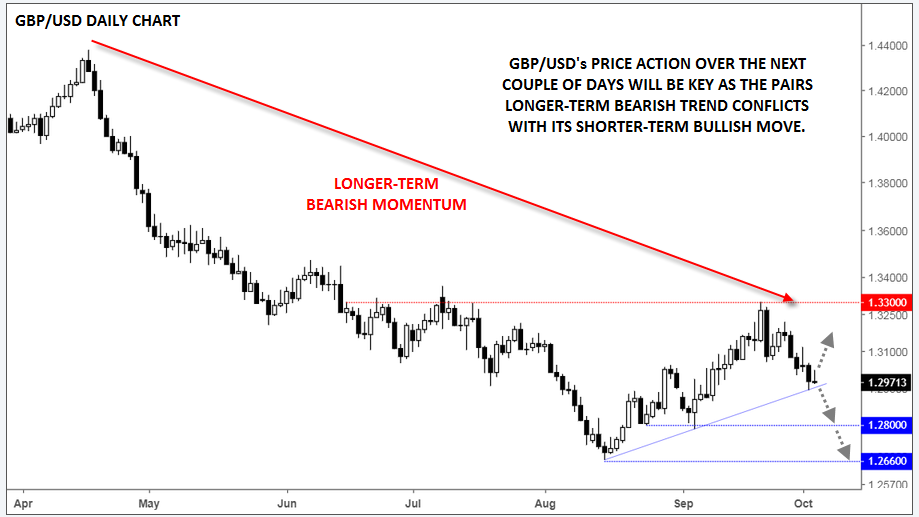