Nonetheless, the pound’s ongoing recovery suggests investors are continuing to price out the prospects of a no-deal Brexit.

As my colleague Matt Weller highlighted in his article yesterday, Theresa May’s “Plan B” did little to shake things up. The UK Prime Minister offered very few details as to what her new proposals look like but did struck a more inclusive tone. She plans to hold more talks with the other political parties to "find the broadest possible consensus,” although the leader of the opposition Jeremy Corbyn continues to refuse to sit down for talks unless the PM rules out a no-deal Brexit. She has just one week to tell parliament what here plan B exactly looks like. Some argue what the is intentionally running the clock down, so we are headed towards a no-deal Brexit. Others say, she is using the threat of a no-deal Brexit as a weapon to win more favours from the EU, but will the latter call her bluff? There are a lot of questions, but very few answers. I am hopeful that there will be some clarity soon but honestly can’t see how she will be able to come up with a plan without getting Corbyn on board and thus ruling out the prospects of a no-deal Brexit.

Nonetheless, the pound’s ongoing recovery suggests investors are continuing to price out the prospects of a no-deal Brexit. If and when the UK government somehow manages to secure a soft deal, this should be positive for the pound as it would allow the Bank of England to tighten its belt again. But a new consensus is also starting to form around the idea of a second EU referendum. If we do go down that road, and given the prospects of people changing their minds, then the pound could absolutely surge higher. However, as things stand, that is still only a small possibility and not the default position of the UK parliament.

Meanwhile on the macroeconomic front, this morning’s labour data from the UK was slightly positive in that average earnings including bonuses climbed to 3.4% in the three months to November compared to a year earlier period. This was a touch stronger than expected. Excluding bonuses, UK wages was unchanged at 3.3% on a 3m/y basis. Meanwhile UK unemployment employment rose to the highest on record, which pushed down the unemployment rate to just 4.0% – the lowest since 1974.

For a change, the pound reacted (positively) to the above UK data, with the Cable climbing beyond the 1.29 handle to trade around 1.295 at the time of writing. However, the focus remained firmly fixated on Brexit negotiations.  No one is quite sure how things will pan out on Tuesday, when the UK parliament is expected to vote on Theresa May’s revised plan for Brexit. So, the situation remains unclear to say the least. But what is becoming clear is that market participants are pricing out a hard-Brexit or a no-deal Brexit scenario and this is what is driving the pound higher for the time being. A clean break above the 1.30 handle could trigger technical buying and push rates towards the November (1.3175) or September (1.3298) highs next. 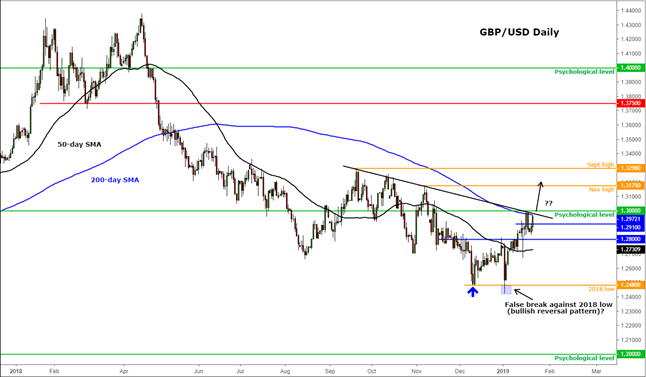