The Brexit merry-go-round continues to turn, with today’s news highlighted by the potential for a “flextension” to Brexit negotiations...

The Brexit merry-go-round continues to turn, with today’s news highlighted by the potential for a “flextension” to Brexit negotiations. PM Theresa May formally requested an extension to June 30th, with the UK fielding candidates for EU elections if no deal has been agreed by late May. On the other side of the English Channel, EU President Donald Tusk floated a “flextension” with a maximum period of a year for the UK to reach an agreement. The next hurdle will be the EU summit on Wednesday, where policymakers will decided whether to accept May’s proposal.

GBP/USD traders are decidedly unimpressed, driving the pair down to test key support in the 1.2975 area as of writing. The pair remains within a near-term bearish channel (mirrored by a similar channel in the RSI indicator), suggesting that the bears have the upper hand on medium-term horizons. A break of 1.2975 support would take rates to a fresh six-week low and open the door for further downside toward 1.2900 or the February low near 1.2775 next. Traders may need to see a recovery above this week’s high at 1.3200 to shift the pair’s general bearish tone. 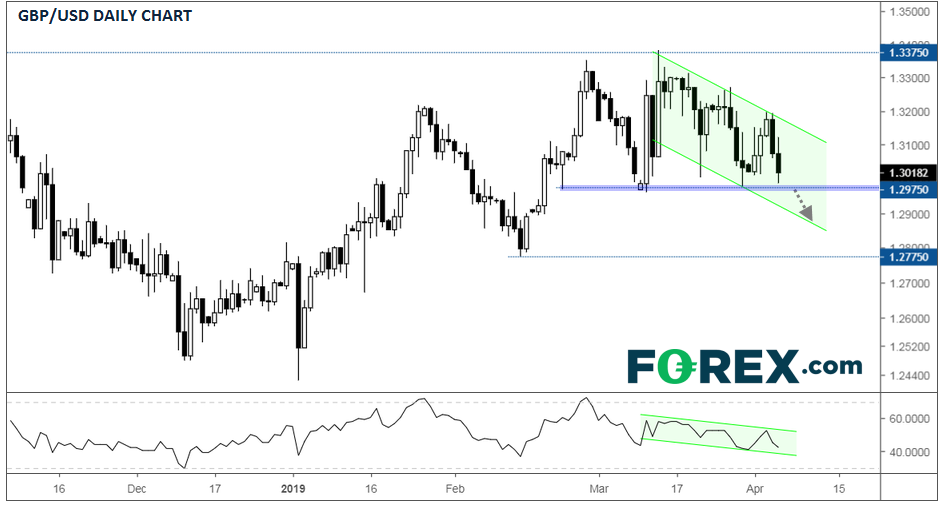