Gold – Is it still a flight to safety?

On Monday, majority US equity indices were hit hard, with their biggest one-day selloff in months.  The S&P 500 closed -73.50 on the day, the Dow Jones Industrials were -614, and the NASDAQ 100 was -316.50.  All broke through key support areas and are below their respective 50 Day Moving Averages. As one may expect, the flight to safety trade was on, as both the Japanese Yen and the Swiss Franc were the big winners of the day.  USD/JPY was -60 pips and USD/CHF reversed the prior day’s gains, -51 pips on the day.  Interestingly, and maybe telling, Bitcoin sold off with risk.  The cryptocurrency was -4209 on the day, or -8.91%. BTC was NOT a flight to safety on Monday.  (Did the stock selloff lead to margin calls, which led to Bitcoin selling to raise cash?)  The arrow on the chart below shows Monday’s price action in the S&P 500: 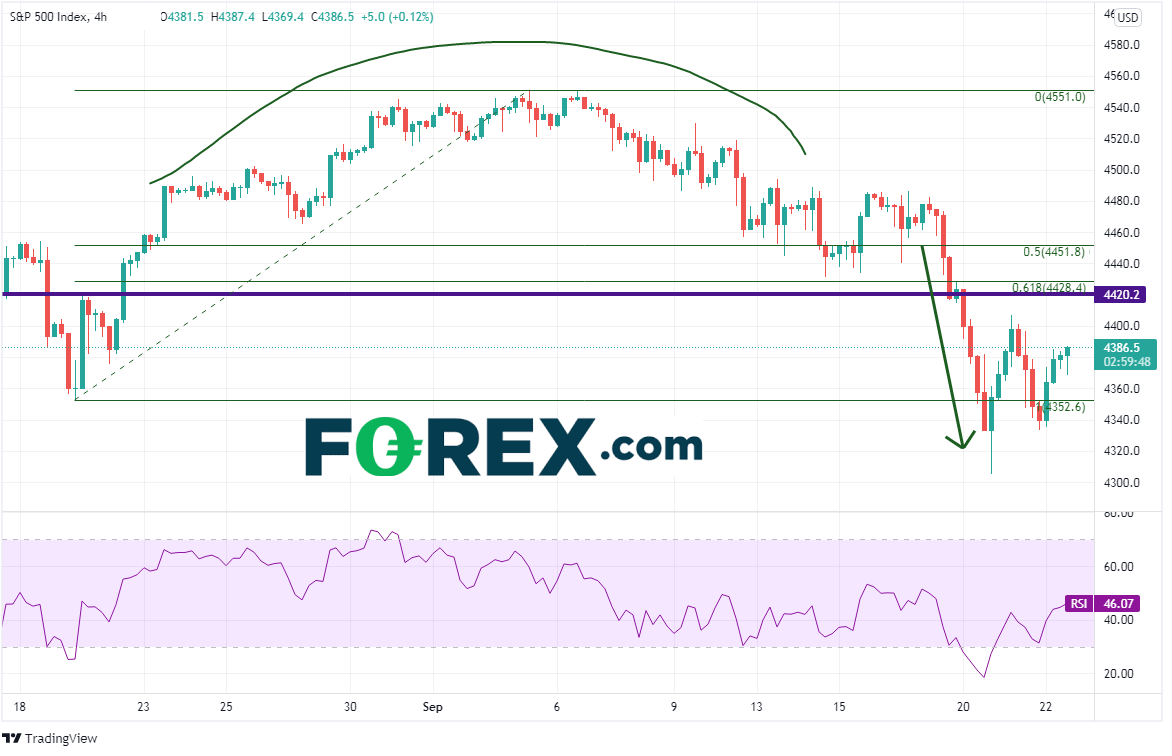 And with the traditional flight to safety assets gaining strength on Monday (Yen and Swiss Franc), naturally Gold (XAU/USD)  would have a large positive day as well. Right? Not exactly.  Gold did close higher on Monday, however, it only closed +6.94.  This is a relatively small move higher compared to the selloff in stock indices.  As a matter of fact, Gold was +12.52 on Tuesday as the S&P500 was +5.00 on the day! 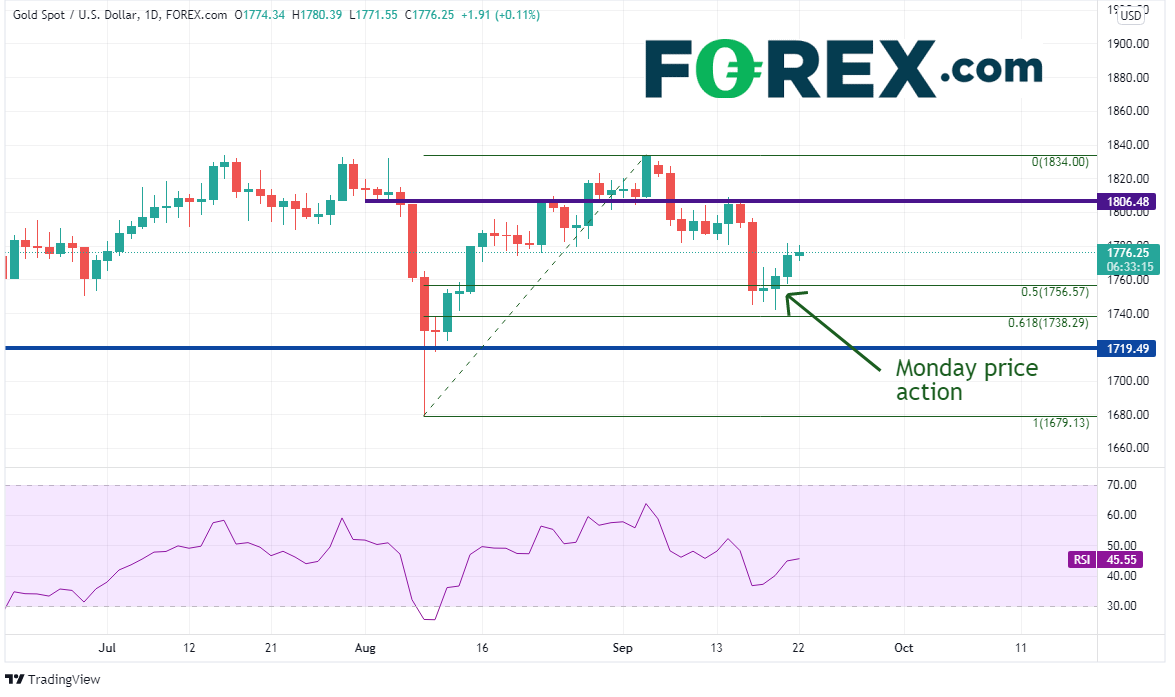 This means that the selloff in stocks on Monday may have just been profit taking near all-time highs in stock indices ahead of the FOMC meeting.  However, that doesn’t mean Gold isn’t a safe haven anymore.  Traders may be waiting until after the FOMC meeting to decide what to do with Gold. However, looking at a daily timeframe, Gold had been selling off since the August 2020 highs, making lower highs.  However, in early September, that trend may have begun to change, as price tested the late July highs near 1834.   Price appears to be forming an inverse head and shoulders pattern, with the neckline at 1834.  If price does move higher, the target is near 1992, and possibly even the all-time highs at 2075. 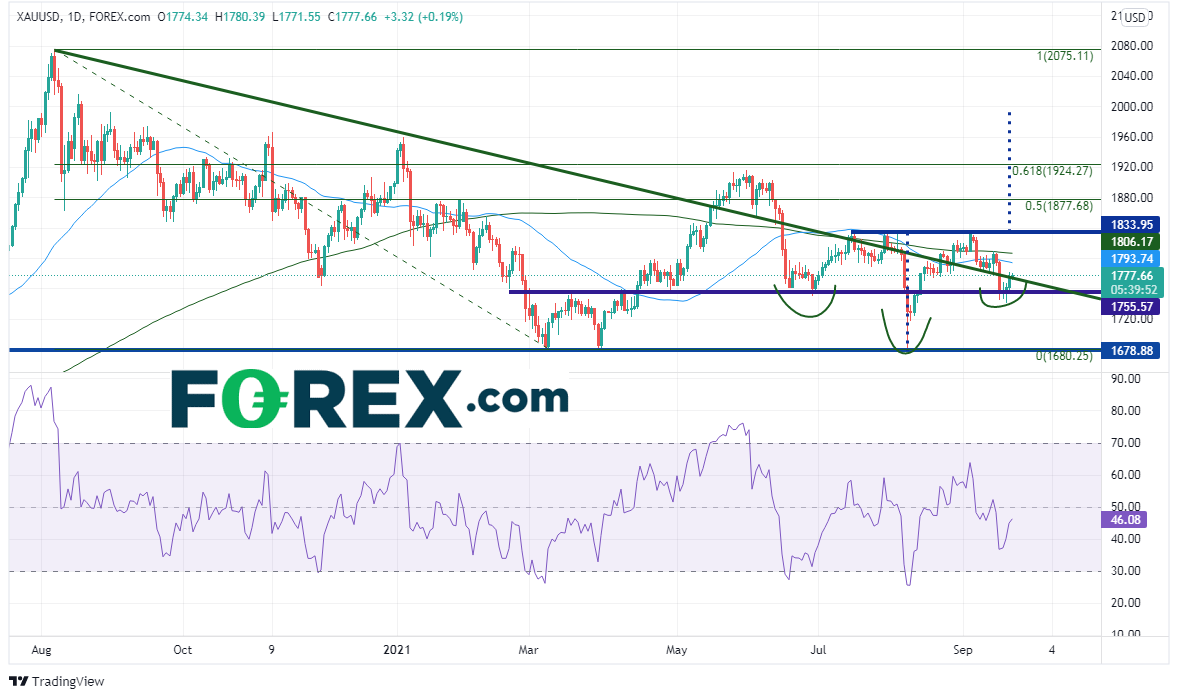 Given the (non) move in Gold on Monday, the stock market selloff on may have simply been profit taking head of the FOMC meeting.  However, if stocks do continue lower after the meeting, that may signal a change and Gold may return to the more popular investment vehicle as a flight to safety.