The recent upsurge in Bitcoin and other crypto currencies may have had a direct impact on precious metal prices, if one can assume they are viable substitutes for paper gold and silver.

The recent upsurge in Bitcoin and other crypto currencies may have had a direct impact on precious metal prices, if one can assume they are viable substitutes for paper gold and silver. Like a herd, market participants have a tendency to follow the money. So when Bitcoin goes up in value by hundreds, if not thousands, of dollars per day, the fear of missing out (FOMO) kicks in and speculators rush to buy the crypto currency because they don’t want to be left out. Often they fund these positions by liquidating their assets elsewhere, especially those which have been underperforming. With gold and silver failing to make any good progress for months, if not years, this is why I think precious metals have been undermined by Bitcoin as investors have made better use of their funds. But whether a big bubble is being formed in Bitcoin and when that might deflate, no one knows. However, one thing is for sure: Bitcoin will never be gold or silver, whatever nominal value it might attain. Bitcoins can easily be hacked, deleted by mistake, and potentially go back to zero when there is a significantly better substitute available. In contrast, gold and silver represent physical stores of value which cannot and will never go to zero.

The other problem for precious metals is that at the moment they are being overlooked, not just because of the ongoing hype for cryptos but also because of investors’ insatiable appetite for risk as the global stock indices continue to hit multi-year or record highs almost on a daily basis. In addition, precious metals are denominated in the dollar, which has managed to rebound in recent days after falling for much of the year. But if Bitcoin and/or Wall Street crash soon, then the safe haven commodities should make a comeback. Other factors that might help support gold and silver include, among other things, geopolitical risks, inflation, and a sustained increase in physical demand or restriction in supply. These factors are near impossible to predict. But, ultimately it will be the direction of the dollar and stock markets that gold and silver investors will need to concentrate on the most going forward. While a rebound in the dollar would be bad news for precious metals, it is likely that the stock markets will correct themselves at some stage. When this happens, the appeal of safe haven precious metals will rise.

Meanwhile technical traders may wish to watch silver here as it tests a key support zone in the $15.65-$15.85 area. After the recent sharp falls, we are indeed on the lookout for a bullish pattern to emerge, ideally around this key zone.  However, even when such a pattern emerges, we won’t call it a bottom until and unless silver goes on to create a new higher high as well. 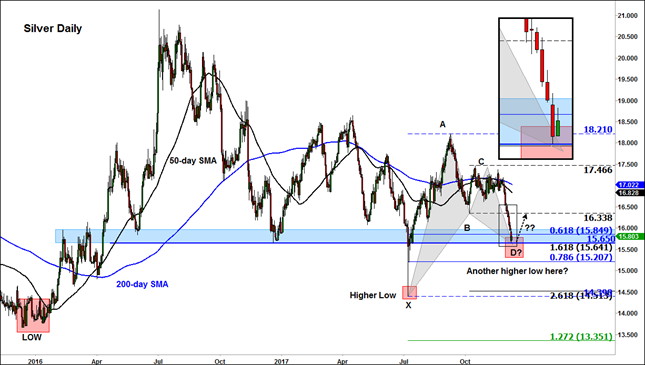