Following the burst of momentum in the summer months, gold has endured a rather ugly – if still volatile – couple of months in September and October.

Following the burst of momentum in the summer months, gold has endured a rather ugly – if still volatile – couple of months in September and October. In part, the recent struggles can be explained away by increased optimism that the US-China trade situation and Brexit stalemate could soon be over, reducing safe-haven demand. In addition, you have profit-taking from overbought levels also applying a bit of downward pressure. All told however, with central banks still in easing mode and geopolitical risks remaining elevated, the long-term outlook remains positive for the commodity.

Indeed, even if the US-China were to end their trade war, this won’t necessarily be a bad thing, as the prospects of raised physical demand from one of, if not the, largest gold consumer nations may keep prices support. In fact, investor interest in gold has already been rising steadily over the past few months. According to the World Gold Council, global gold-backed ETFs and similar products had $3.9bn of net inflows across all regions in September. This meant, collective gold holdings increased to 2,808 tonnes, the highest of all time, thus surpassing the late 2012 levels, when gold was trading near $1,700. If ETF holdings are anything to go by, then gold could rise at least another $200 from current levels. But obviously it is not as simple as that, as the other variables impacting prices now are different to those in 2012.

From a technical point of view, gold’s sharp gains in the middle of this year undoubtedly caused prices to become overbought. But now we are seeing the longer-term momentum oscillators such as the Relative Strength Index (RSI) on the weekly chart slowly work off their overbought conditions, crucially through time rather than price action. This is a good sign as it indicates gold is holding near the highs without giving back much. With the RSI no longer being overbought on the weekly time frame, the long-term uptrend could soon resume. The precious metal is currently stuck inside a bull flag pattern. It is likely that we will see fresh technical momentum buying should prices beak out of this bullish continuation pattern in the coming days or weeks. But before the breakout can potentially occur, we can’t rule out the prospects of further short-term pain for the bulls. The point of breakout is around $1510-20. So, while it remains below here, we are neutral. If and when gold breaks above here, then we will turn bullish.

Indeed, the long-term momentum has been bullish for gold. Although the metal fell in September, it is currently holding in the positive territory so far this month. Prior to September’s drop, gold had:

So, due to the above reasons, we favour looking for bullish rather than bearish price patterns to emerge going forward. That said, the bulls must show up and soon, before we reinstate our bullish view. 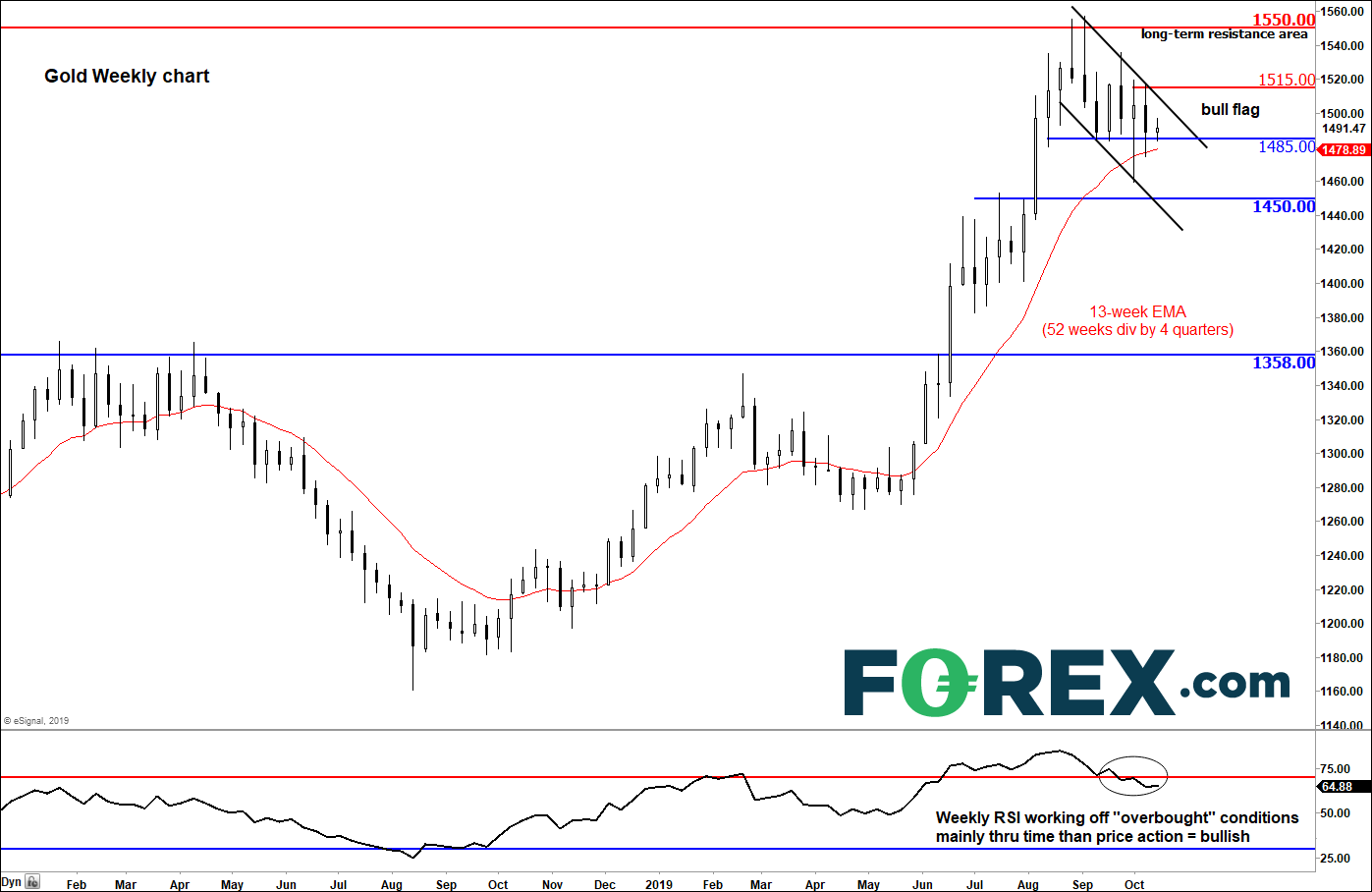