Gold loses out as US stocks hit new highs

Gold has had a quieter week, at least relative to crude oil and some major currencies, most notably the pound.

Gold has had a quieter week, at least relative to crude oil and some major currencies, most notably the pound. The precious metal surged to a new 2017 high last Friday as speculators anticipated there to be further missile launches from North Korea at the weekend. But there wasn’t any. As a result, safe haven bets were unwound throughout the week and gold fell back, along with Japanese yen and Swiss franc. North Korea then launched another missile test earlier this morning and this was one of its furthest-reaching yet. However, after an initial knee-jerk reaction, equities bounced back while gold and yen, in particular, weakened sharply. Investors are evidently confident that North Korea’s actions will not lead to a war, because there seems to be a split between world powers. The US says China, North Korea’s closest ally, and Russia should do more to put pressure on Pyongyang. But China doesn’t appear too keen on getting involved while Russia has condemned "aggressive" US rhetoric. So, for the time being investors are largely ignoring geopolitical risks stemming from North Korea, for otherwise gold would be much higher and US indices far from being at record high levels. With the dollar also showing some signs of support, the buck-denominated precious metal could weaken further in early parts of next week – that is unless North Korea tensions rise by a good few notches over the weekend again. So, gold could ease back towards that key $1290-$1300 support area, but then I would expect to see at least a bounce of some sort from that zone. However, any move below $1276, the last low prior to the latest rally, would be bearish. For now, though, the trend is still bullish. 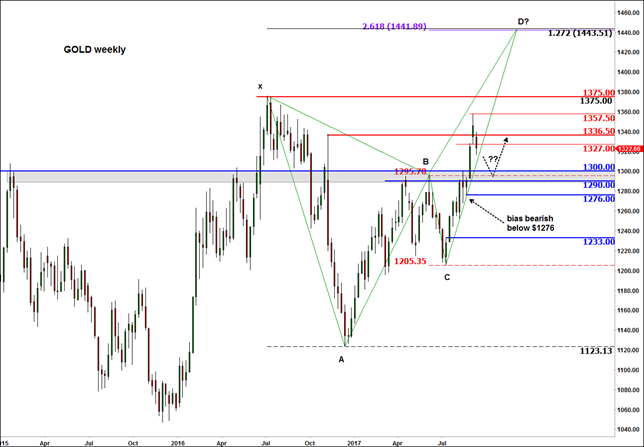