Apart from the crypto carnage today and news of the Dow’s fastest 1000-point rally in history, there hasn’t been an awful lot happening in other markets today, with the major FX pairs and gold being fairly stable.

Apart from the crypto carnage today and news of the Dow’s fastest 1000-point rally in history, there hasn’t been an awful lot happening in other markets today, with the major FX pairs and gold being fairly stable. The main news was from the UK this morning, where inflation eased slightly for the first time since June. But at a good 3.0%, the Consumer Price Index (CPI) still remains a whole percentage point above the Bank of England’s target. So, this is unlikely to be a game changer. The pound weakened a little on the back of this with the GBP/USD dipping to 1.3750 this morning, before bouncing back to trade at 1.3770 at the time of this writing. The dollar was actually higher not just against the pound but against other major currencies as the greenback bears probably banked profit after its big falls in recent days. However as the session wore on, it gave back some of its gains. This helped to lift gold off its lows, supported further by a wobble in stocks in the afternoon trading.

But I doubt that the dollar selling is done just yet. Consequently, I continue to expect that gold will break further higher in the coming days, especially if the rally on Wall Street pauses or ideally for gold bugs, reverses. For now, traders on Wall Street continue to ignore warning signs that the market is considerably overvalued, both from technical and fundamental points of view. With the major central banks withdrawing the monetary stimulus which boosted risk assets in the first place, the current low volatile conditions disguises the dangers facing investors at these extremely elevated levels. Ahead of a potential correction in the stock markets, it appears like some market participants may have already bought protection in the form of gold. After all, the metal’s historic negative correlation with US indices appears to have broken down as both assets ended 2017 higher.

So, unless the dollar manages to find some buyers, gold appears poised to push further higher. Thanks to its recent rally, the main moving averages are all pointing higher now, objectively telling traders that the trend is indeed bullish. The fact that there has been acceptance above the $1300 level is also a good sign for gold. Given these technical considerations, it is likely that the metal will go on to probe liquidity above the previous swing highs at $1357 and $1375 next. These levels mark the respective highs for 2017 and 2016. So if we go above these levels then we will have a major “higher high” in place. Meanwhile short-term support levels come in at $1334, followed by $1327. Regardless of what happens in the short term, the technical bias will remains bullish unless gold goes back below that pivotal $1300 hurdle again. 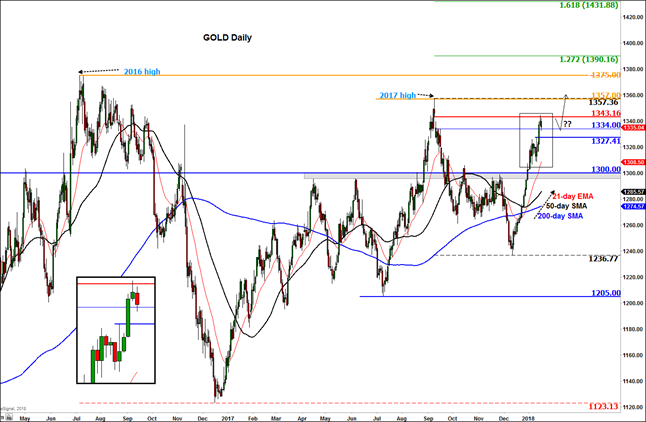