Gold continues to hit new highs for the year. At a good $1350 per troy ounce, the precious metal is trading at its best level since 8th September 2017.

Gold continues to hit new highs for the year. At a good $1350 per troy ounce, the precious metal is trading at its best level since 8th September 2017. This was the day when gold formed its high at $1357 last year, before dropping $120 or 8.8% to $1237 by 12th December 2017. But fast forward a month and a bit, and gold is now threatening to break above last year’s high. Will it be able to do so? It depends almost entirely on the US dollar. The greenback has today extended its losses after US Treasury Secretary Steven Mnuchin at the World Economic Forum in Davos said, what we all know, that a weaker dollar is ‘good’ for US trade. Mr Mnuchin also added that expected growth in the economy would support the currency in the long term. If he is correct, then the dollar could make a comeback at some point down the line. The dollar may get an oversold bounce in the coming days as the major currency pairs test massive long-term levels, but perhaps its best chance for a comeback may be after 8th February when the US government is expected to run out of cash again. Once the budget is finally passed then the dollar bears may find it difficult to justify selling the reserve currency. But for now, the greenback’s ongoing weakness is helping to support buck-denominated gold. Precious metals are currently ignoring the rallying stock markets. The sharp gains in the major indices may very well be unsustainable, and it could be that investors are buying protection in the form of safe haven gold ahead of an inevitable correction in equity markets. Should stocks correct themselves, then this could actually further support gold, perhaps regardless of what the dollar may be up to at the time. So, overall there are more reasons to be optimistic than pessimistic on gold and indeed silver – at least in the short-term anyway. As a result, we anticipate that gold will probably break above the 2017 high of $1357 in the coming days. The next bullish target beyond this level is at $1375, the 2016 high. Meanwhile support comes in at around $1341-44 area, which was previously resistance. Any move below the next support area of $1325-27 would be a bearish development, however. 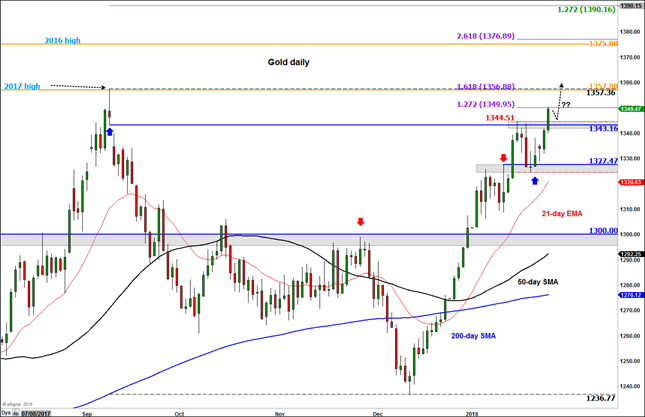