Gold on the brink as stocks and yields rebound

Gold has continued to ease back from its multi-year highs hit earlier this month...

Gold has continued to ease back from its multi-year highs hit earlier this month, as we had highlighted the possibility last week here and here.  Demand for the precious metal has fallen amid the revival of hopes for a trade deal between the US and China, with talks set to resume next month. Beijing has released a tariff exemptions list for products from the US this morning, in a further sign of de-escalation in the dispute. Investors have piled back into equities and out of haven assets like gold, yen and government bonds. In turn, yields have risen from their lows, further dampening the appeal of the noninterest-bearing precious metal.

So, unless risk appetite turns sour again, or the dollar slumps — say, as a result of hawkish ECB or a very poor US CPI report tomorrow — gold could extend its losses further. Indeed, out of the two precious metals, gold looks more vulnerable than silver given the rosier sentiment towards risk assets, with the grey metal being supported by its other main use as an industrial material. Hence, or otherwise, the gold-silver ratio has been falling, making silver more appealing (or less attractive to the sellers) in the short-term.

At the time of writing, gold was a touch higher on the day but still down on the week. The metal has now fallen for the third consecutive week, following a 4-month rally. Yesterday, it broke its most recent low at around $1492/5 area. If the sellers want to put their foot down here, we could see the sell-off accelerate as more buyers are forced to rush for the exits with the next nearest major support being all the way down at $1450. However, if the bulls manage to cling on here and push the metal decisively back above the $1492/5 area today then this would indicate that a low is in place. 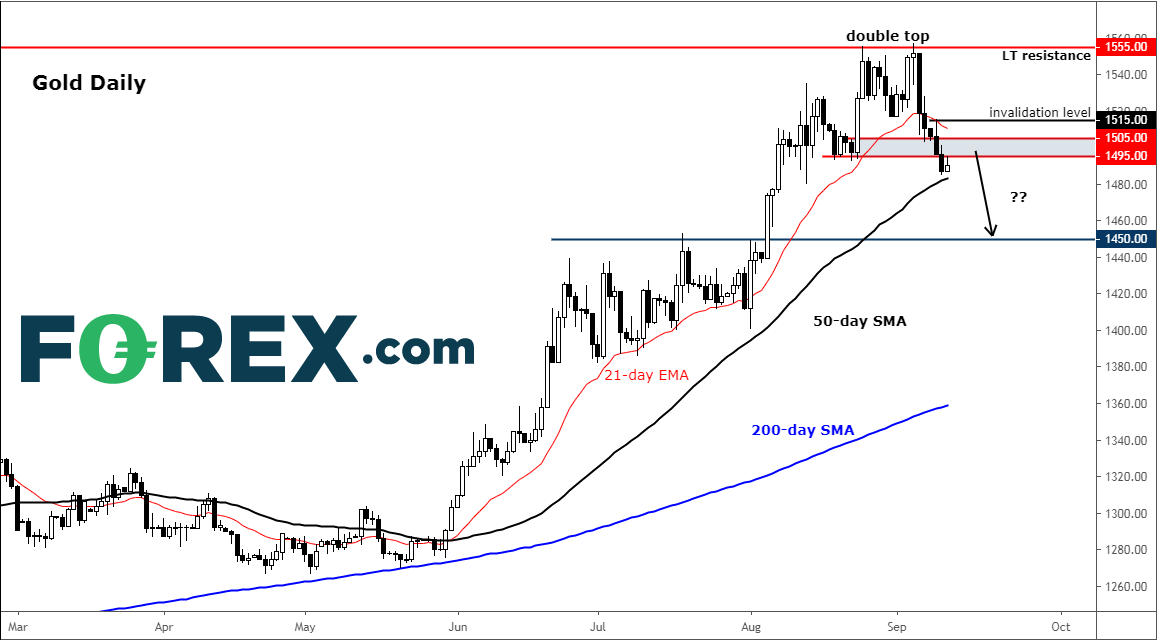