We don’t see any real reason for the bond market rally to falter tomorrow or at any time soon, meaning US and other developed economies’ yields should remain depressed. If so, this could be good news for stocks as well as lower-yielding assets such as gold and silver, despite precious metals being traditional haven assets.

Today was meant to be a quiet day in the markets ahead of the Fed’s much anticipated policy decision tomorrow. But we were spoilt. There were some noticeably sharp moves in FX, stocks and commodities markets thanks to some unexpected headlines. First it was the ECB President Mario Draghi who amazed stock market investors in Europe by delivering a surprisingly dovish message this morning, sending the DAX surging higher. That rally was about to run out of juice but Trump came to the  recuse when he tweeted that he had a “very good telephone conversation with President Xi of China.” The US President said the two leaders “will be having an extended meeting next week at the G-20 in Japan,” adding that their respective teams will begin talks prior to that meeting. Finally, there was a report from Bloomberg which said the White House had explored demoting the Federal Reserve Chairman Jay Powell. However, while that review took place in February and White House advisor Larry Kudlow confirmed the government was not taking any action to change the Fed’s leadership, the timing of this leak was interesting nonetheless with some commentators reckoning that it could have been a deliberate attempt to influence Powell’s decision to push for a cut at the conclusion of this FOMC meeting tomorrow. But we certainly don’t think the Fed will cut, although it is very likely to prepare the markets for a July trim. Consequently, we don’t see any real reason for the bond market rally to falter tomorrow or at any time soon, meaning US and other developed economies’ yields should remain depressed. If so, this could be good news for stocks as well as lower-yielding assets such as gold and silver, despite precious metals being traditional haven assets. Consequently, gold could break above last year’s high at $1365/6. 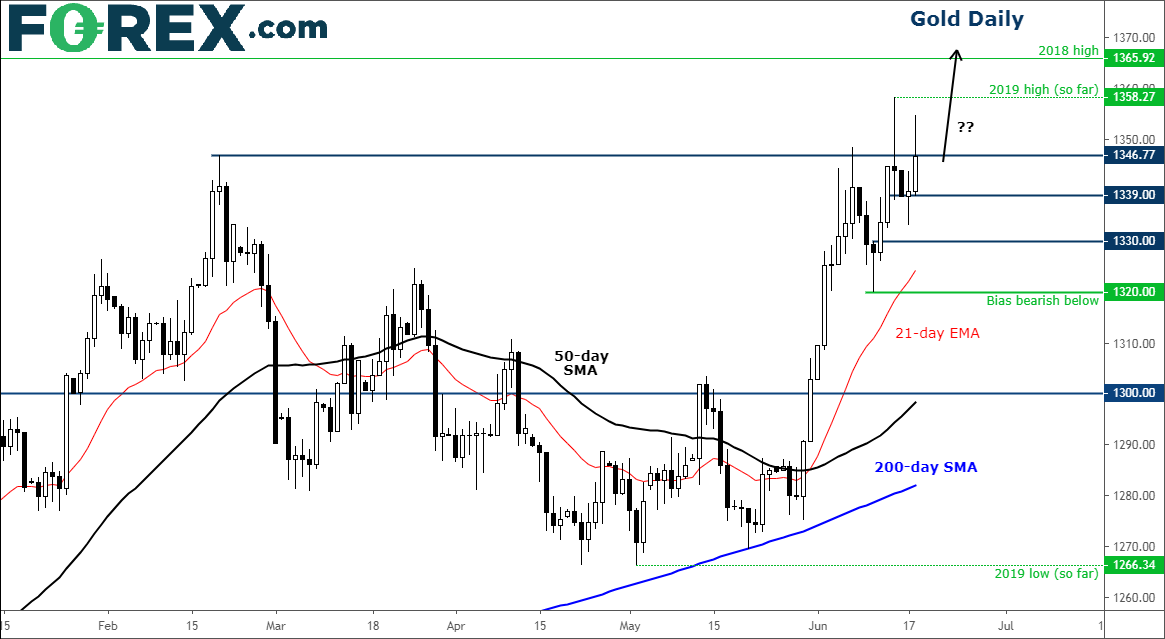