The markets are spooked by signs and speculation that the remaining major central banks which are still dovish are beginning to turn hawkish.

The big moves have occurred in the stock markets with index futures tumbling in overnight trading, before bouncing back slightly. The stock market losses have been triggered by the recent sharp falls in government bond prices, which have helped to push yields higher. The markets are spooked by signs and speculation that the remaining major central banks which are still dovish are beginning to turn hawkish. The Fed has already started to shrink it huge $4.5 trillion balance sheet; the Bank of Canada has raised interest rates three times already, while the Bank of England has also tightened its belt in 2017. Meanwhile, the Bank of Japan recently announced a slight reduction in its bond purchases, while the European Central Bank refused to talk down the euro, in a sign that it too is ready to tighten its belt in the coming months. As concerns rise over receding monetary support from central banks, there is a danger that the stock markets could hit the reverse gear. If so, this should be good news for safe haven gold and silver, which tend to go up during times of market turmoil.

Now gold has already broken above its 2017 high of $1357, as we had expected, before retreating over the past few days. It has now taken out some short-term support levels in the process, but the key support levels such as $1335 and $1325 are still intact, so the long-term technical bullish outlook remains in place for the time being. If we are going to see new highs for the year in the coming days, then gold will have to break back above those short-term broken levels, which are now acting as resistance. Among these, $1344/45 is an interesting level to watch today. If there’s acceptance above it then don’t be surprised to see gold go back above $1357 – the 2017 high – soon. And if gold were to get back to this levels then it would increase the probability of it reaching for liquidity that is resting above the 2016 high of $1375 next. On the flip side, if $1335 gives way first, then one will have to consider the bearish argument, more so if it also goes below $1325. 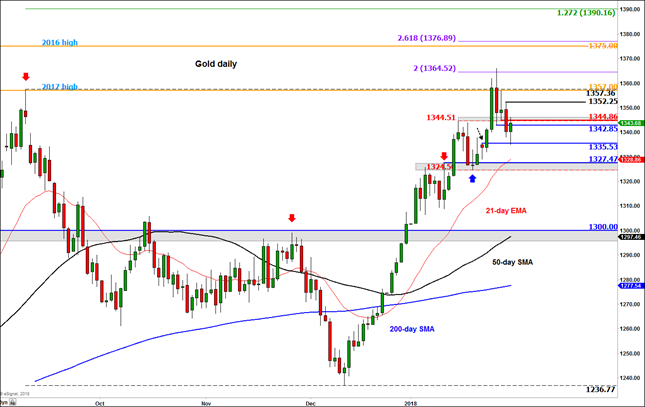