This current dollar rebound, which has contributed to pressuring dollar-denominated gold, has been driven in part by high anticipation of a Federal Reserve interest rate hike by the end of the year as well as speculation that the new Fed Chair soon to be appointed by President Trump will likely be more hawkish than current Chair Janet Yellen. Yellen’s term ends in February, and while it is possible that she may be re-appointed, markets are betting that the more probable scenario will be the introduction of a new Fed chief on Trump’s shortlist that should be less dovish than Yellen. If this is indeed to be the case, the dollar could get a further boost and gold, a non-yielding asset, should remain pressured.

Aside from the anticipation of higher interest rates and a more hawkish future Fed, along with support for the dollar that this anticipation has helped foster, lack of demand for safe-haven assets during a period of elevated risk appetite has also weighed on gold prices. Like the safe-haven Japanese yen, gold has fallen as demand for riskier assets like stocks has continued to rise. On Wednesday, US equity markets rose to all-time highs yet again, with the Dow leading the way into new record territory above 23000 and market volatility fluctuating not far off all-time lows.

In the absence of any severe geopolitical risk factors that are able to faze highly complacent markets (including the North Korean nuclear threat), demand for gold could continue to suffer. This is especially the case if Fed expectations remain hawkish and the dollar continues to be supported.

From a technical perspective, this week’s drop in gold has signified a price retreat from the important $1300 resistance area as well as the key 50-day moving average. Under $1300, the technical bias remains bearish. Near-term downside targets in the absence of major risk events are around the key $1250 and $1200 price support areas. 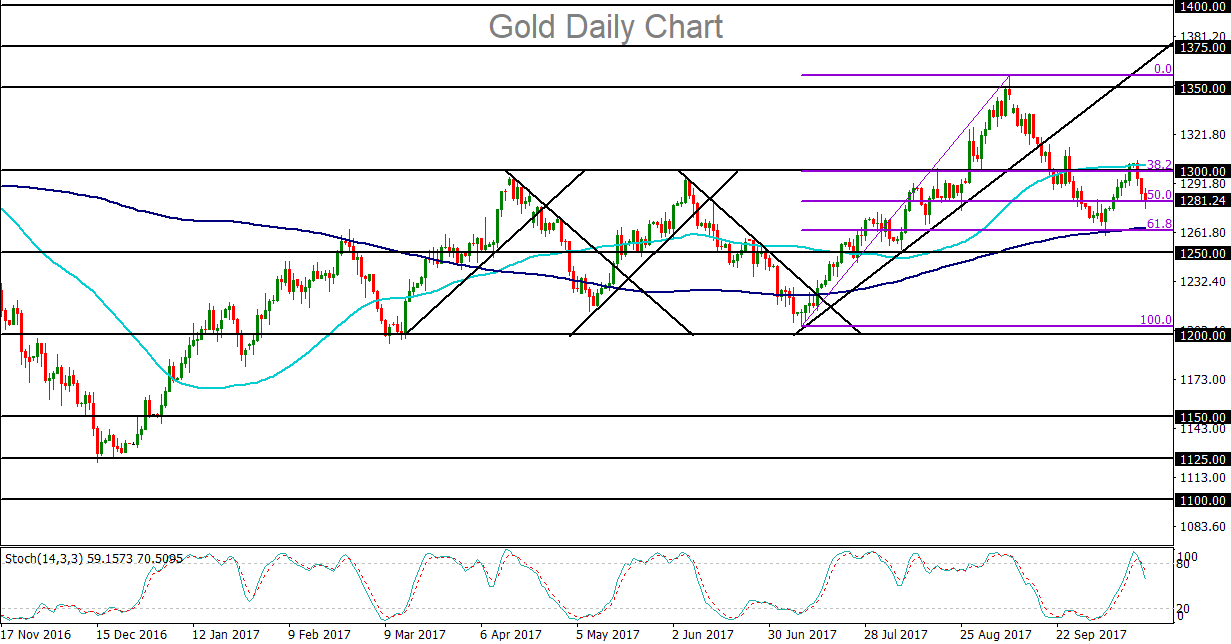