Thanks to a pullback in bond yields and an equity market sell-off, yesterday saw gold climbed to its best level since July to reach a critical resistance level around $1238-40.

Thanks to a pullback in bond yields and an equity market sell-off, yesterday saw gold climbed to its best level since July to reach a critical resistance level around $1238-40. The metal is now up for the fourth consecutive week as a result of investors moving out of equities and into the relative safety of government debt. In the event yields were to fall further then gold could potentially rise even more.

However, the longer-term outlook for the metal remains murky at best, as major central banks continue to tighten their belts. The US dollar remains among the strongest of currencies out there and with the Dollar Index trending higher, this could be an additional factor weighing on buck-denominated gold prices.

But for the time being, the bulls are in control and will remain so unless gold breaks back below the most recent low at $1183. Monday’s low around $1220 is meanwhile a short-term pivotal level that the bulls need defend, else the metal could go back to $1205 support before it decides on its next move.

If the bullish trend remains intact and the metal goes on to break through that $1238-40 resistance, then in this case we could see a continuation towards the 200-day moving average at $1262 next. 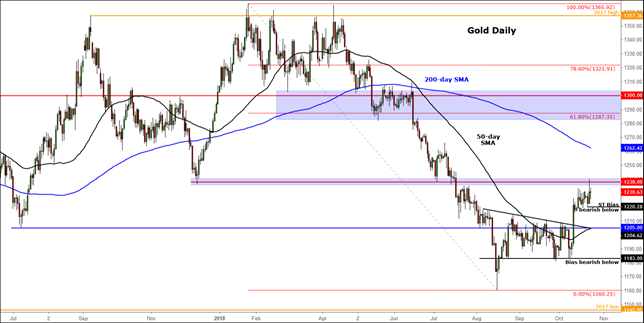