Gold has been one the main beneficiaries from Tuesday's publication of a very poor US manufacturing PMI report, which caused havoc in the markets.

Gold has been one the main beneficiaries from Tuesday's publication of a very poor US manufacturing PMI report, which caused havoc in the markets. The news hurt stocks and the US dollar, causing bond yields to fall as investors sought the relative safety of government bonds. Dollar-denominated and safe-haven gold thus found itself in unexpected demand after falling noticeably in the previous days. With yields falling again, this also helped to boost the noninterest-bearing metal’s appeal on a relative basis.

Now, in the event this week’s upcoming US macro pointers disappoint expectations as well, or otherwise fail to sharply reduce the odds of another rate cut at end of this month, then gold stands ready to benefit further, given the current favourable macro conditions with major global central banks being in easing mode. According to the CME Group’s FedWatch tool, the probability of a 25-basis-point rate cut from the Fed is currently almost at 64%, up sharply from about 50-55% last week, following the publication of the manufacturing PMI report and the inevitable tweet from Donald Trump in which the US President once again criticised the Fed and blamed the central bank for the downturn in manufacturing activity. 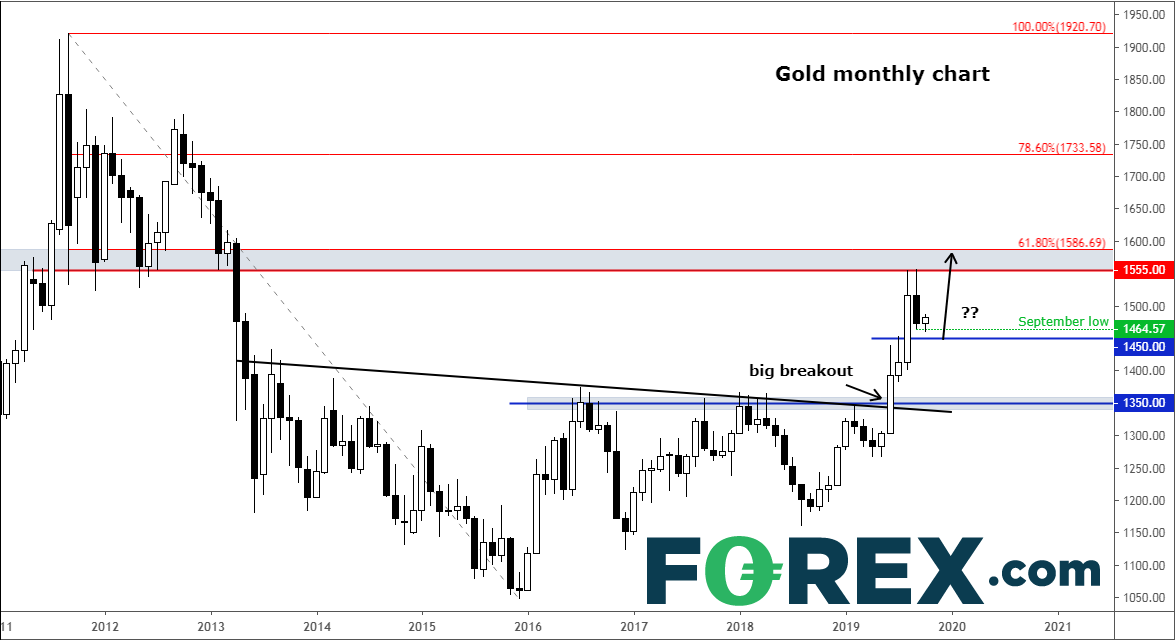 There is no doubt that gold’s long-term technical outlook is positive, even after what was a relatively small retracement that began at the start of September. And we are now expecting the precious metal to potentially resume its long-term rally. Remember, gold had risen sharply for four consecutive months prior to the hiccup in September. So the recent weakness should be put into perspective.

Now some would argue that (1) gold should retrace back to the point of origin of that long-term breakout around $1350 before continuing higher, while (2) others point to the fact prices had created a “Head and Shoulders” reversal formation during its consolidation pullback in September, as can be seen on the daily and lower time frames. In both cases, the metal “should” be falling, they argue, especially with the Dollar Index continually hitting new 2019 highs (until Tuesday's reversal).

Well, my response to the above points are as follows:

First, as far as point (1) is concerned, if gold prices were to go back THAT far to retest the point of origin of the breakout from the 6-year-old resistance range, then why can’t it continue going lower? After such a lengthy period of consolidation and the subsequent breakout, gold ‘shouldn’t’ go back that deep if that was truly a major breakout that we have witnessed. As I believe that was a major breakout, I don’t expect gold to revisit $1350s any time soon – unless something changes fundamentally.

With regards to point (2), it is important to point out that the head and shoulders formation that was formed on the daily only took just over a month to take shape. Now compare this with the breakout from 6 years of major resistance. Which one do you think is more important? If you agree that the latter is, then the breakdown of the neckline of the H&S pattern at around $1485/90 area could turn out to be a major bear trap. So, the bulls should be happy if we go back above it and hold there.

In fact, the bears may have already gotten trapped following Tuesday's rebound when gold formed a piercing candle formation on the daily. Tuesday also marked the first day of the month, when gold prices briefly broke below the low from September. So, was this brief break down  and the sequent rebound THE trap? If so, then the next big pool of liquidity that price may gravitate towards would be the area above September’s high at $1555.

But first thing is first: the bulls need gold to show confirmation that it has indeed turned the corner. A break and hold above the daily H&S neckline around $1485/90 is a must. Otherwise, the downside pressure could persist for a while yet.