I was struggling to make sense of gold’s price action earlier this morning and as we approach the day’s close I am still not sure what to make of it.

I was struggling to make sense of gold’s price action earlier this morning and as we approach the day’s close I am still not sure what to make of it. Why write on gold if I am not clear about its direction, you may wonder. Well, it is often when things don’t make sense when big things tend to happen. The precious metal has been trading higher throughout the day despite continued risk-on theme in the markets as evidenced in German stocks which surged higher this morning, pushing the benchmark DAX index to a new record high. Wall Street also opened at new record levels, although the indices here soon turned red ahead of the FOMC policy decision and Facebook’s earnings results later this evening. The FOMC statement showed very few surprises, with the only notable change from the previous statement being an upgrade to the economy from "rising moderately" to growing "at a solid rate." The dollar showed little reaction as one would have expected. The greenback was still higher against a number of currencies, including the yen, euro and pound, although commodity currencies were faring slightly better at the time of this writing.

Gold’s apparent resilience could therefore either be a trap in order to get the bulls on board before a sharp drop later this week, or a genuine move in which case it would point to a potential drop for the US dollar and/or equities. The dollar may weaken if US President Donald Trump chooses Jerome Powell as the replacement for Fed Chair Janet Yellen. Mr Powel is considered to be a dove and so he’s likely to keep interest rates low for longer, if elected. But let’s not forget also that this is a NFP week, which means not many people are ready to commit in one or the other direction ahead of the data release. This may help explain gold’s largely directionless, static, volatility. It is possible we may see further chop and churn until at least Friday. But judging by price action on silver, which rallied sharply above $17 to its highest since October 20, it wouldn’t come as surprise to me if we see gold also pushing higher in the coming days. Even so, I wouldn’t turn bullish unless it goes on to reclaim that $1300 hurdle again 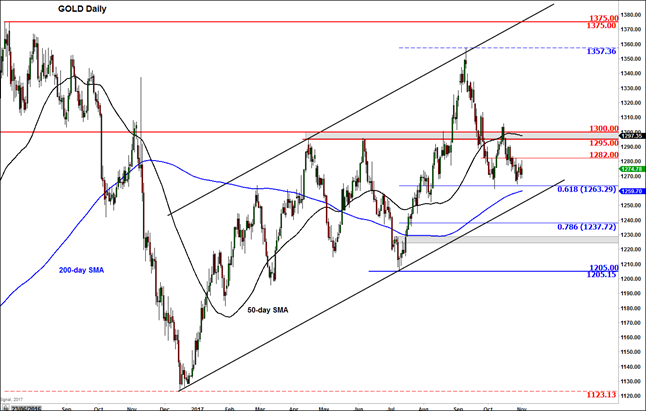