Gold surrendered its small gains and was trading lower on the day at the time of this writing. The precious metal looks heavy mainly because of a firm dollar. The greenback rallied after the Federal Reserve turned out to be a lot more hawkish last week than expected. Echoing the hawkish sentiment, the Fed’s William Dudley yesterday argued against pausing the rate hike cycle yesterday. But with the lack of any major economic data this week, it remains to be seen if the dollar will be able to climb further, and what that would mean for gold.

In the event that the dollar manages to extend its gains further, then buck-denominated precious metal could come under additional pressure. However an exception to that rule would be if we head into a period of stock market turbulence, which may boost the appetite for perceived safe-haven assets like gold and silver. For now though, equity indices remain underpinned near multi-year or record high levels across a number of developed economies.

So it looks like investors still prefer the racier equity markets over holding onto gold, an asset which pays no interest or dividend, and costs money to store. When you factor into that equitation the prospects of a firmer dollar going forward, the outlook for the yellow metal appears grim. That being said, things can change quickly in these markets, so always be prepared for a sudden shift in sentiment.

But technically, gold’s inability to sustain itself after briefly breaking through its long-term bearish trend line a few weeks ago was never a healthy sign. After that failed breakout attempt, every short-term bounce in gold has been sold as the bulls abandoned their positions and the bears increased theirs. Given gold’s current bearish price action, the metal looks poised to drop to $1236 and possibly $1200 next, levels which were previously support or resistance.

At this stage, the path of least resistance is clearly to the downside for gold. But that will change if (1) we see a distinct reversal pattern around these levels and/or (2) a decisive break above the trend line. If the latter happens then that would signal the end of the long-term downtrend. For gold to get anywhere near that level again, it may require the help of a fundamental stimulus. 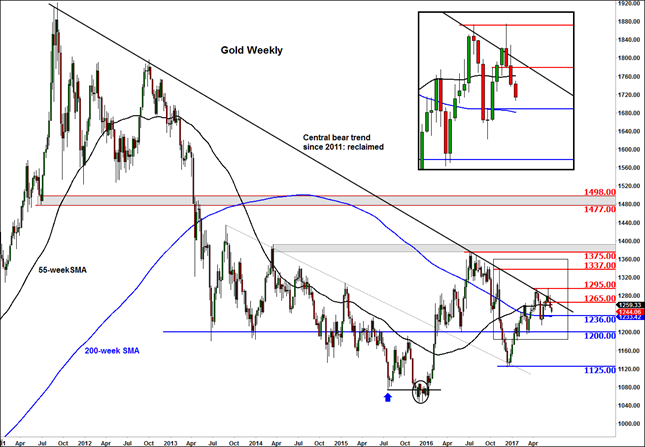