Gold surges above $1250 as dollar falls

<p>Employment at the largest sector of the world’s largest economy has shrunk. That’s according to the employment component of the ISM Services PMI that was released this afternoon. It fell below the boom/bust level of 50, printing 49.7 in February from 52.1 the month before. This is the first time it has dropped below 50 since February 2014 and bodes ill for Friday’s official employment report. And although the broader index remained in expansion territory, at 53.4, it was still below 53.5 recorded in January.</p>

Employment at the largest sector of the world’s largest economy has shrunk. That’s according to the employment component of the ISM Services PMI that was released this afternoon. It fell below the boom/bust level of 50, printing 49.7 in February from 52.1 the month before. This is the first time it has dropped below 50 since February 2014 and bodes ill for Friday’s official employment report. And although the broader index remained in expansion territory, at 53.4, it was still below 53.5 recorded in January.

The news caused the dollar, which was already lower on the day, to extend its decline, while stocks showed a mixed reaction – falling first before recovering slightly. Amidst the confusion, there was one clear winner: gold. The safe haven metal surged to above $1250 per troy ounce and was holding there at the time of this writing.

Since breaking sharply higher in early February, hold has actually managed to hold its own pretty well in spite of the recent stock market rally and dollar appreciation. On days when stocks and the dollar had risen sharply, gold fell only moderately. This strongly suggested that a breakout was on the way, which may have happened now.

While still not quite out of the danger zone yet, it looks like gold may be able to extend its rally now that the $1250 level has been taken out. The precious metal needs a daily (and ideally a weekly) close above $1250 to confirm the breakout.

If the metal can sustain its gains and move above February’s high of $1263 then the bulls may aim for January 2015 high at $1307 next. Above this level, there is not much obvious resistance until the 200-week moving average, currently at $1339. Another important level is where the long-term bear trend meets the 38.2% Fibonacci retracement against gold’s all-time high, at around $1380. This would be a major level to watch, should we get there.

As things stand, only a break back below $1200 would invalidate this bullish outlook. Short-term bulls would also be disappointed if gold were to move back below the broken $1250 resistance level.

It is important to note that most other US data over the past couple of week have been generally mixed and the poor ISM services PMI does not necessarily mean the official jobs report will also disappoint on Friday. 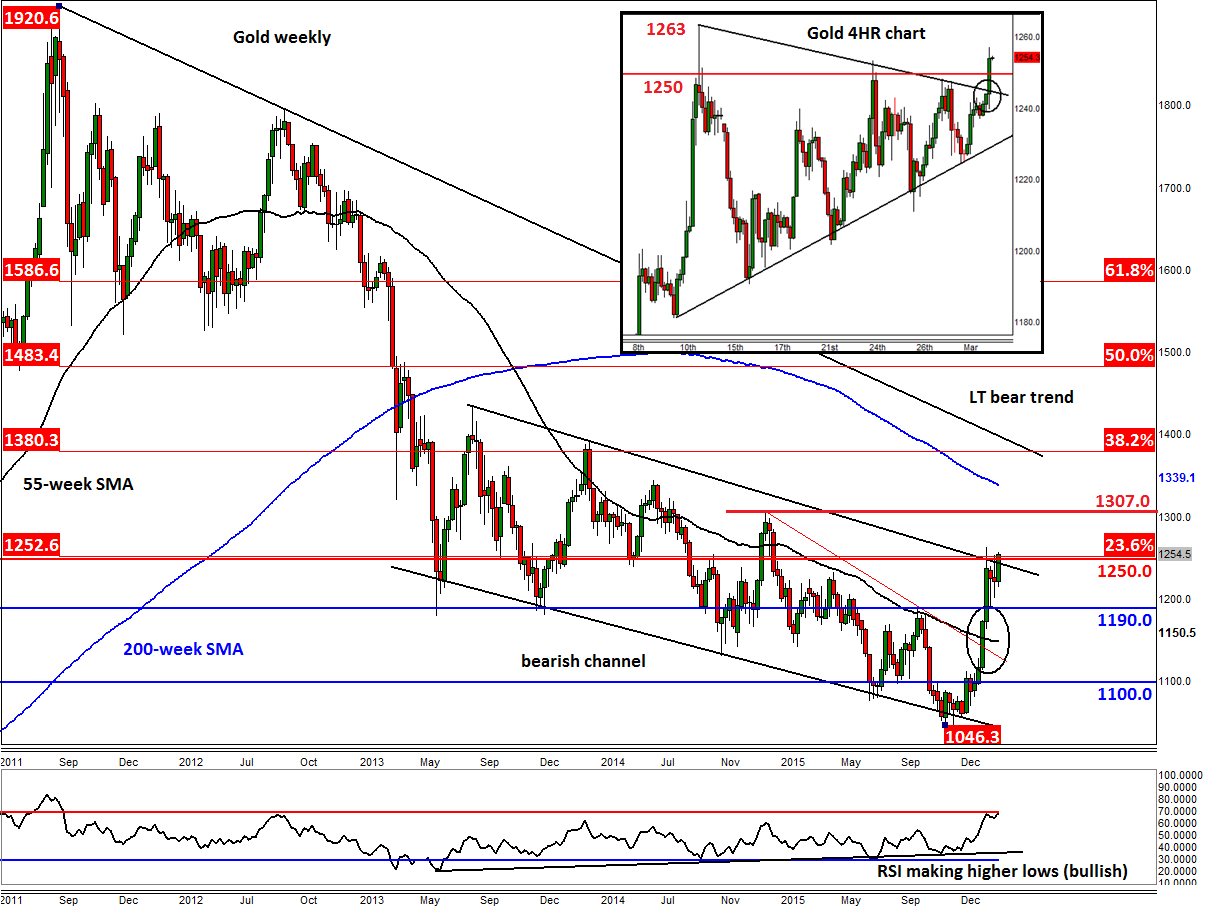