Gold tentatively backs off from highs ahead of Fed

Gold backed off from its latest highs but maintained much of its recent strength on Wednesday ahead of the Federal Reserve’s afternoon FOMC statement, where market participants will be closely watching for clues as to the anticipated pace of rising interest rates after last month’s rate hike.

Since that December rate hike, renewed volatility has shaken global equity markets and concerns over worldwide economic conditions have deepened, especially with regard to China. These circumstances have adversely affected financial markets around the world, helping to push up the price of gold, and are likely to put into doubt the Fed’s previously more hawkish intentions for the pace of rate hikes this year.

With respect to gold, if today’s Fed statement is interpreted as being even more dovish than expected, the US dollar could slide and the price of gold could surge above its new 13-week high of $1122 that was just established a day earlier on Tuesday. Conversely, an FOMC statement that maintains the relatively hawkish tones of December’s Fed meeting could lead to continued strength for the dollar and a downside reversal for gold.

For more than a month, the price of gold has been in a choppy climb that has lifted the metal off December’s five-year lows around the key $1050 support level. Price action around that support level formed a double-bottom technical pattern late last year that suggested at least a tentative bottoming for gold prices. This bottoming was supported by heightened volatility in the equity markets in the beginning of 2016 that has attracted some asset flows to the perceived safety of gold.

Currently, the price rise has just reached the key 200-day moving average, which is acting as a tentative resistance factor. In the event of a more-dovish-than-expected FOMC statement that should help to support the price of gold, a breakout above the 200-day moving average could target higher recovery levels around the $1140 and then $1170 resistance objectives. Any relatively hawkish statement, in contrast, could lead to a downside reversal underneath the 200-day average, in which case key support resides around the $1080 level. 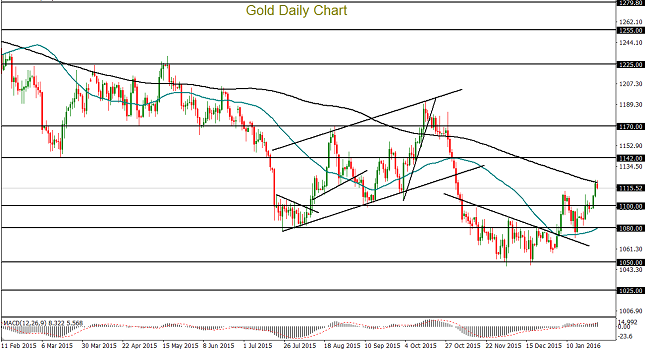